If you're suffering heartbreak in a faraway place, may we suggest the healing powers of a certain fabled flower?
By Helen Oyeyemi 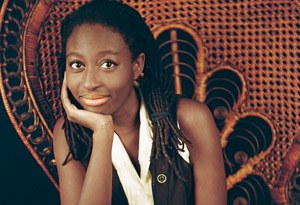 Photo: Saneesh Sukumarak
PAGE 2
Later that night, in a darkened room above a quiet street, musicians in white robes played the baglama and the oud, and dervishes whirled and cast shadows on the brilliantly lit squares beneath their feet. The nakedness of their ecstasy was so shocking, I couldn't look at the Sufis' faces. Instead, I watched their hands, which began at waist level, then slowly, slowly rose as their arms were pulled up above their heads, as if unfurling, extending toward divine love that returned in waves and soaked them to the core. They made me feel, for the first time, that I might never find the kind of love I need. But the presence of those joyful dancers made it impossible to do the sensible thing and give up hope.

The next day, December 31, I visited Topkapi Palace, home to generations of Ottoman sultans. The palace is a fantasy of wealth and power—you walk around it and The Thousand and One Nights comes chillingly to life. Topkapi is a place of tall trees, hidden windows, and luxurious prisons—living quarters for eunuchs and slave girls kidnapped from all over the world. I saw its beauty, but the nature of that beauty was entirely cruel. Shameless city, beckoning my imagination with its ancient intrigues and rococo seaside mosques. I was wary of a seduction that would lead nowhere.

Hours later, at Hagia Sophia, I stared up at the weathered mosaics depicting Christ and his mother alongside the names of Allah and Muhammad, among others, written in green and gold, and it came to me that I was standing in one of the wonders of the world. I couldn't even manage a smile. That night I lay on my stomach in bed, stuck on a single sentence of Maugham's novel: "Sometimes he felt so lonely that he could not read...." At midnight, as the year turned, I thought I heard fireworks, and went to the window to find that it was celebratory gunfire. Youths with rifles, laughing.

In the morning I ate a filling meal, almost for novelty purposes. The other mornings I'd sat in that breakfast room at the top of the house and looked down on Istanbul's streets and scaffolding as I ate plain yogurt and drank hot water. When you're unhappy and trying to conceal it, eating or drinking anything with any flavor constitutes a risk—there's no telling what might make you cry. But I was flying west to the archaeological site of Ephesus later that morning, to wander amid the rubble of the goddess Artemis's ruined city, and I thought I'd better have some sweetness first. There was some jam in a dish on the table, and I poured a spoonful of it over my yogurt. I thought it was strawberry jam, but it wasn't. Rose petals hung suspended in the thickness of the syrup, some soft, some crisp with crystallized sugar, and the taste...the wistful, earthy bloom of it on my tongue. It made me think of Narnia, the fragrant pull of the Turkish Delight that Edmund betrayed his siblings to taste.

Later that day at Ephesus, I saw the most innocent-looking Judas trees growing around the broken shell of the Library of Celsus, and olive trees hanging their branches over the roofs of doorless stone houses, and realized there was a change in the way I was seeing. A subtle change that needed nursing, but it was there, and it was real. I'd just had flowers for breakfast, so I put the effect down to that.

Next: Discovering a rose's power
From the April 2012 issue of O, The Oprah Magazine

More Inspiration
Why Choice Is the Way to Happiness
How to Stop Making Tiny Mistakes That Make You Look Stupider Than You Really Are
Donna Brazile's 4 Things That Make Life More Delicious
A Pup Named Oprah Changes the Life of a Wounded War Vet
12 Quotes for the Brokenhearted
End the Winter Blahs: 7 Indisputable Signs of Spring
How to Deal with Emotional Triggers
Thought for Today - Renewal