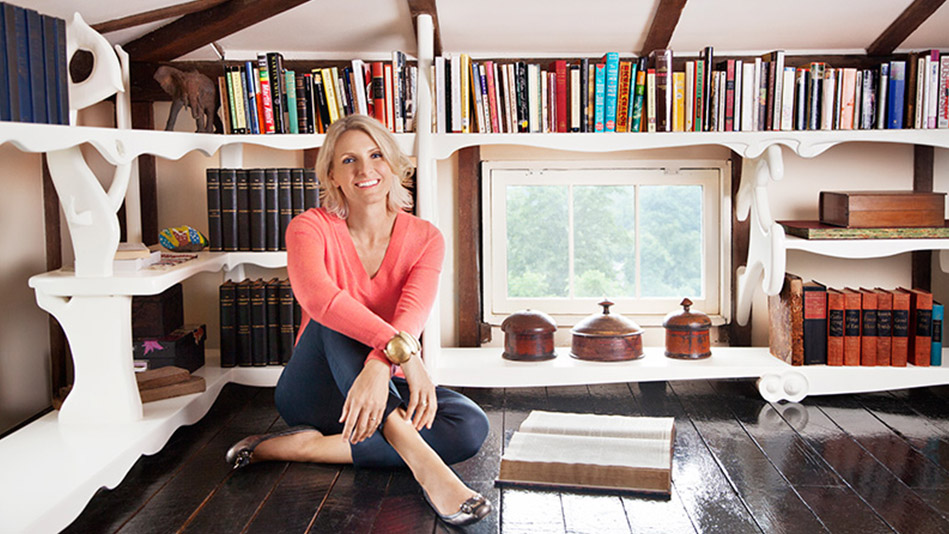 Photo: Jessica Antola
PAGE 4
In Frenchtown there is an inn festooned with American flags, a handful of charming restaurants and a pet supply shop into which Rocky barrels forward. (The proprietor gives him a dog treat, greeting him by name.) Nearby is a cavernous shop filled with a rainbow's worth of wooden-bead necklaces; an apothecary chest stuffed with knobs and handles; many bowls of rings, stones and tokens from around the world; and congregations of stone Buddhas like those in Gilbert's front yard. The shop, Two Buttons, is Liz and Jose's. A popcorn machine is dispensing kernels to shoppers, and a clerk pours wine for the grown-ups. Gilbert's found a baby to dangle things in front of, and a friend with whom to gossip.

Behind the store is a leafy path that runs for miles alongside the Delaware River. "You could walk it all the way to Philadelphia if you wanted," Gilbert says, as Rocky pulls her through the mud, his nose attuned to the trail. Gilbert took many fact-finding trips to Pennsylvania with her old friend Margaret Cordi, who helped her tackle the research The Signature of All Things required. Gilbert also traveled to "learn mosses," as Alma says in the novel, enlisting the help of bryologist Robin Wall Kimmerer, PhD, who took her into the woods outside Syracuse, New York, to poke at luxurious carpets of the genus Anomodon, along with the pelts of Rhodobryum roseum that swathe the woods' limestone ledges. Gilbert made lists of what she needed to see in the Tahitian islands—a verdant cave, a steep hiking trail, a model for the meager oceanside quarters in which Alma would live—which she visited in 2012. Atop the island of Raivavae, she stood where two weather systems collided, the heavens raining on one side of the mountain and beating down sun on the other. She walked behind a tall, narrow waterfall so divinely beautiful she felt it was sacrilegious for a human being to see.

Now Gilbert comes upon a tree on the river's edge. "This is my second favorite tree in Frenchtown," she says. It's a narrow sycamore, white-trunked and dappled with flaking brown bark. "These trees grow along riverbanks," Gilbert says, "and from above you can spot the path of the river from all the white." A few dozen paces up the path, Gilbert admits how much, during the memoir period, she'd missed inventing characters, building worlds in her mind—and yet how much those memoirs made this novel possible.

She moves toward another white tree, which possesses a more imposing girth and a broader breadth of branches. "This is my favorite tree in town, because of this business, this whole business right here," she says, pointing to the lavishly mossy filigree on the trunk's northern face. One suspects Alma would love that whole business, too.

"It's been a long time to be away from the only thing I ever really wanted to do," Gilbert says. Then she turns to admire the tree once more, with its great height and oddly beautiful posture—its torso tending toward the river, its arms reaching for the path.

For an excerpt of Elizabeth Gilbert's new novel, The Signature of All Things, download the O iPad app. Subscribe now at My.TheOprahMag.com.

More Inspiration
3 Quick Ways to Eat, Pray and Love
4 Steps to Find Your Life's Path
Creativity Boost: How to Tap into Right-Brain Thinking
4 Ways to Squeeze an Extra Hour (or More!) into Your Day
What to Do if You Can't Find Your Passion
How Chris Rock Lives His Best Life
Nora Ephron: On Maintenance
Think Fast! 5 Ways to Perform Under Pressure