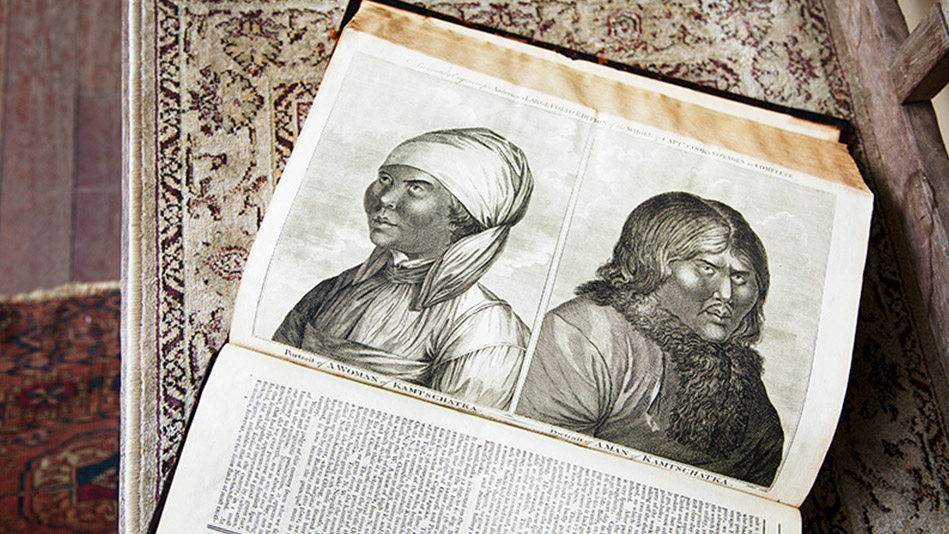 Photo: Jessica Antola
PAGE 3
In The Signature of All Things, Alma is the child of Henry Whittaker, a blustering botanist and pharmaceutical magnate, and Beatrix, his stern Dutch wife. As the inquisitive Alma comes of age on her family's Pennsylvania estate, she is raised on tales of Henry's wild adventures with the legendary Captain Cook. She frequently runs afoul of Beatrix's austere social strictures. She develops an abiding love for the natural world. But she finds herself constrained by the reality of her time: She is female, destined to spend her life housebound. Alma does her best to indulge her vast intellect with Henry's equally vast library, mastering every subject she studies, inheriting her father's interest in flora and drawing, as botanists of the era did, exquisitely detailed renderings of plants.

And then, in a field of limestone boulders, a 22-year-old Alma stumbles upon something even more exquisite: dense thatches of moss, each a bustling ecosystem unto itself. Over the ensuing decades, Alma becomes a leading bryologist, combing through these teeming landscapes: "This was a stupefying kingdom. This was the Amazon jungle as seen from the back of a harpy eagle," Gilbert writes. The discovery ignites something in Alma, and the rest of the novel sees her evolve into a woman of daring, one who takes control of her father's holdings, falls in love (and gets her heart broken), and visits some of the planet's most distant reaches, ultimately arriving at a scientific theory that rivals those of her era's greatest minds.

"My initial idea was that she was never going to leave her father's estate," Gilbert says. "I wanted to write about what a woman with that much intellect, creativity and energy might do to sublimate her ambitions. I've always believed any talent you have that you're not capable of using becomes a burden, that it metastasizes."

It's hard not to wonder if this statement is autobiographical, a reference to Gilbert's break from fiction—her first literary love, she says. Imagine writing a book you expected few people to read. And then the whole world read it. You would become, in the eyes of others, inextricable from that book, prompting them to want that from you again and again. It would be difficult to deny the demand.

Or worse, imagine never being able to write at all. In a sense, Gilbert's work honors the long roster of women in history whose sex restrained them—who never saw what lay beyond their front gate. Gilbert recalls how her great-grandmother, who barely left Pennsylvania, marveled that she went to India, Indonesia, the Andes. The Signature of All Things is an offering to women like her, and Alma is an embodiment of them, as real to Gilbert as her kin. "When I was writing the end of the book," she says, "it was through sheets of tears and snot. I love her so much. There's nothing you could do to convince me that Alma's not an actual figure in history."

Had she lived, Alma would likely not have "gotten on a ship and sailed," as Gilbert let her do—which Gilbert knows. "I wanted to rewrite the 19th-century women's novel, which had only two possible endings: You get married or you're ruined by a sexual or social error. You get Pride and Prejudice or Anna Karenina; you're living in the big mansion with Mr. Darcy or you're under the wheels of a train. I wanted to write about somebody who doesn't get everything she wanted, and is able to look at her life and say it was an interesting one, a worthy one, a dignified one.

"I know that story. I know how you fail in love or you fail at something and you try to make something interesting out of it."

More Inspiration
3 Quick Ways to Eat, Pray and Love
4 Steps to Find Your Life's Path
Creativity Boost: How to Tap into Right-Brain Thinking
4 Ways to Squeeze an Extra Hour (or More!) into Your Day
What to Do if You Can't Find Your Passion
How Chris Rock Lives His Best Life
Nora Ephron: On Maintenance
Think Fast! 5 Ways to Perform Under Pressure