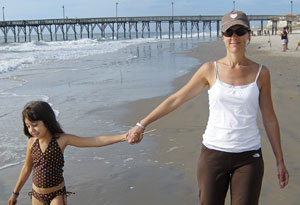 Photo: Courtesy of Krista Bremer
PAGE 3
Dizzy with the promise of an impossibly bright afternoon, I thought I could be someone else—glistening and proud like the greased-up bodybuilders on the lawn, relaxed and unself-conscious as the hippies who lounged on the pavement with lit incense tucked behind their ears. In a beachside bathroom with gritty cement floors, I changed into my new two-piece suit.

Goose bumps spread across my chubby white tummy and the downy white hairs on my thighs stood on end—I felt as raw and exposed as a turtle stripped of its shell. And when I left the bathroom, the stares of men seemed to pin me in one spot even as I walked by.

In spite of a strange and mounting sense of shame, I was riveted by their smirking faces; in their suggestive expressions I thought I glimpsed some vital clue to the mystery of myself. What did these men see in me—what was this strange power surging between us, this rapidly shifting current that one moment made me feel powerful and the next unspeakably vulnerable?

I imagined Aliya in a string bikini in a few years. Then I imagined her draped in Muslim attire. It was hard to say which image was more unsettling. I thought then of something a Sufi Muslim friend had told me: that Sufis believe our essence radiates beyond our physical bodies—that we have a sort of energetic second skin, which is extremely sensitive and permeable to everyone we encounter. Muslim men and women wear modest clothing, she said, to protect this charged space between them and the world.

Growing up in the '70s in Southern California, I had learned that freedom for women meant, among other things, fewer clothes, and that women could be anything—and still look good in a bikini. Exploring my physical freedom had been an important part of my process of self-discovery, but the exposure had come at a price.

Since that day in Venice Beach, I'd spent years learning to swim in the turbulent currents of attraction—wanting to be desired, resisting others' unwelcome advances, plumbing the mysterious depths of my own longing. I'd spent countless hours studying my reflection in the mirror—admiring it, hating it, wondering what others thought of it—and it sometimes seemed to me that if I had applied the same relentless scrutiny to another subject I could have become enlightened, written a novel, or at least figured out how to grow an organic vegetable garden.

On a recent Saturday morning, in the crowded dressing room of a large department store, I tried on designer jeans alongside college girls in stiletto heels, young mothers with babies fussing in their strollers, and middle-aged women with glossed lips pursed into frowns. One by one we filed into changing rooms, then lined up to take our turn on a brightly lit pedestal surrounded by mirrors, cocking our hips and sucking in our tummies and craning our necks to stare at our rear ends.

When it was my turn, my heart felt as tight in my chest as my legs did in the jeans. My face looked drawn under the fluorescent lights, and suddenly I was exhausted by all the years I'd spent doggedly chasing the carrot of self-improvement, while dragging behind me a heavy cart of self-criticism.

At this stage in her life, Aliya is captivated by the world around her—not by what she sees in the mirror. Last summer she stood at the edge of the Blue Ridge Parkway, stared at the blue-black outline of the mountains in the distance, their tips swaddled by cottony clouds, and gasped. "This is the most beautiful thing I ever saw," she whispered. Her wide-open eyes were a mirror of all that beauty, and she stood so still that she blended into the lush landscape, until finally we broke her reverie by tugging at her arm and pulling her back to the car.

From the June 2010 issue of O, The Oprah Magazine

More Inspiration
Thought for Today - Fatherhood
Breathing Space: June 2010
How to Embrace the Present Moment
How I Lost 25 Pounds (and Stopped Avoiding the Mirror)
How to Live in the Moment
You Don't Need to Be an Artist to Have Imagination
What Inspires the Most Creative People We Know
6 Things Gayle King Is Loving This September