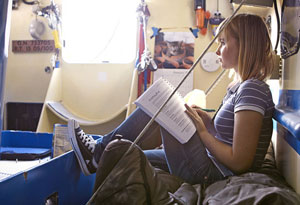 Photo: Coral Von Zumwalt
PAGE 2
About eight weeks later, before a crowd that included several hundred people and a few camera crews in addition to her choked-up parents and six siblings, Sunderland sailed out of her home port of Marina del Rey and headed south into the Pacific. She'd stuffed Wild Eyes with a sophisticated array of navigational and communication devices, plus (among other things) a few schoolbooks, an iPod, and several hundred pounds of freeze-dried food. After almost ten weeks of sailing, she handily rounded the notorious tip of Cape Horn at the bottom of South America, known historically among sailors as the "graveyard of the sea" for its vicious winds and wreck-inducing crosscurrents, becoming the youngest person in history to do it alone. It took another month for her to spot the coast of Africa, but by the time she did, she had a faltering autopilot that forced her to pull ashore for emergency repairs in the South African city of Cape Town, causing her to downgrade her ambitions and abandon the "nonstop" part of her record attempt.

Sunderland remained poised, nonetheless, to become the youngest round-the-world solo sailor. If successful, she'd be edging out a handful of other teenagers, including Zac, her brother, who held the record for 42 days last year before having it swiped by a British boy named Mike Perham. Perham, in turn, was promptly outdone by Jessica Watson, a chirrupy 16-year-old Australian who finished her round-the-world journey this May, managed to do it nonstop, and in a made-for-TV twist, reportedly struck up a romance with Perham via satellite phone during her seven months at sea.

Twelve thousand miles and four and a half months into Sunderland's own journey, however, her fortunes changed. Deep in the southern Indian Ocean, an almost unimaginably empty and unpredictable stretch of water found well below Asia, in the frosty and largely dark latitudes above Antarctica, the teenager and her boat were walloped by a series of major storms with gale-force winds and battering waves the size of three-story buildings. As her yacht bucked and reared amid roiling white-water swells, as gusting, 60-knot winds knocked the boat over, shearing off the radar dome mounted on the mast, as the satellite phone she'd been using to communicate with her parents and navigational team back home abruptly went dead, Sunderland concentrated on what she had to do. But then the ocean made a last show of its might: A rogue wave—a towering wall of dark water—sucked the teenager's boat up its face, and then rolled it without mercy upside down. Icy seawater gushed in as Sunderland was thrown across the boat's cabin, hitting her head, briefly blacking out. Coming to, she felt the boat right itself but was quickly struck by a chilling realization: The ocean had swallowed her yacht's mainsail, snapping its 60-foot-tall carbon-fiber mast as if it were a piece of straw.

It seems fair to say that there are few places on Earth where a kid could be more alone or more at risk. The open waters running beneath Africa, India, and Australia remain both the fastest marine route around the globe and a frontier of the most extreme sort. The winds keen and roar, the clouds hang low, rains can be torrential; turbulent shifts in wind direction toss even large vessels off course. Sailors who cross this area of the ocean report that the conditions are often so stressful, they find it nearly impossible to eat or sleep. Robin Knox-Johnston, the British sailor who in 1969 became the first to complete a nonstop solo round-the-world voyage, has described it as "a miserable, mean, vicious place."

Drifting in the dark in her crippled boat, roughly 2,000 miles east of Madagascar, 2,000 miles west of Australia, and about 500 miles north of the Kerguelen Islands, a volcanic outpost controlled by France, Sunderland did the only thing she could to boost the odds of her survival. She triggered two emergency locator beacons, which would automatically vector her location and beam it via satellite to marine rescue centers around the globe. The message to her family would be worrisomely clear. She and her father, Laurence, a shipwright and lifelong sailor, had gone over the process more than once before she'd left on the trip. Using an EPIRB would signal only the most extreme duress.

And it would stir up a different kind of maelstrom. Within a few hours, Sunderland's distress had gone global—pulsing across newswires and the Internet. TV trucks were soon pouring into the placid California neighborhood where her family lived. Reporters scrummed outside the front door. Network news programs cut to maps showing the vast southern Indian Ocean at the untamed near-bottom of the world. What was a young girl doing alone in the middle of that ocean? What had that ocean done to the girl? And who was responsible for this? Was there some societal message about underparenting or overparenting, about recklessness or greed, to be wrung from Abby Sunderland's fate?
From the October 2010 issue of O, The Oprah Magazine

More Inspiration
The Girl Scout Who Deserves A Badge for Self-Confidence
12 Photos That Will Inspire You to Travel Solo
The Track of the Storm
A Journey to the Center of Your Self
How to Figure Out What Your Dreams Really Mean
Meet the SuperSoul100: The World's Biggest Trailblazers In One Room
13 Celebrities on the Charities Closest to Their Hearts
The Uncanny Dream That Saved Me from Disaster