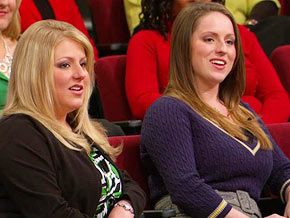 PAGE 9
Growing up, Micki's daughters Haley and Taylor say they picked up on little signs their mother was gay. "At the mall, she would make a statement saying, 'Oh my gosh, that woman is so beautiful,'" Taylor says.

When Micki came out, Haley and Taylor say they were angry. "It was never that she was gay that bothered us," Haley says. "It was the divorce. It was our family just crumbling."

In time, the family began to rebuild. Taylor says she accepted everything one day while cooking with her mom. "The sunlight hit her face in a certain way and her face looked different, and I couldn't at first put my finger on it," she says. "But once I did, I realized that the lines in her face were not from stress anymore. They were from smiling."

Micki now lives happily alongside life partner, Sharon. "We had a union in Texas two and a half years ago," Micki says.

More Inspiration
Excerpt from Connect to Love
13 Memorable Cast Reunions
Everything Is Interrupted
Jessica Seinfeld's Recipes
Winning the War at Home
Delicious & Nutritious
Lisa Marie Presley
Excerpt from Transition: The Story of How I Became a Man