Puppy Love: My Dachshund, My Dear 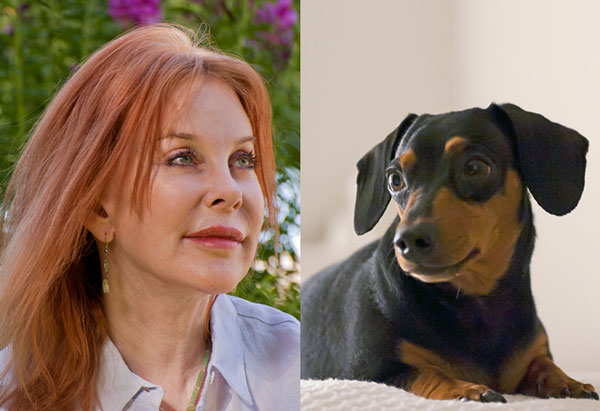 Photo: Jillian Robinson
Six years ago, my younger daughter and I brought home a 6-week-old dachshund. Still unnamed, he fit inside the palm of my hand, an enlarged comma, a velvety-soft punctuation mark. Today, middle-aged, fighting portliness and a fondness for rich foods and lassitude (not unlike his mistress), Simon weighs the same as an average human newborn, about eight pounds. He has a small rime of silver beard under his chin, and sometimes he limps after playing hard, a foreshadowing of the one inevitability I cannot bear to think about.

Because of their tubular shape, dachshunds are prone to severe spinal injuries. A dachshund owner is cautioned never to let her pet jump off high places or use stairs. So Simon, after a mild injury to his spine when he was a puppy, now has a carpeted, custom ramp to run up and down alongside my bed. I have endured a fair number of jokes about this ramp, and that is all I will say on the subject.

One day I came into my bedroom and found him lying under the covers, on his back, head on my pillow, front paws tucked neatly over the edge of the folded sheet. He looked at me, following me with his gaze as I moved through the room. It was unsettling. I walked over and looked down at him. "Who are you?" I asked. "My husband?" Wisely, he did not answer.

Following that unanswered question, I conceived of writing an arch, clever tale of a dachshund who, like Kafka's cockroach, but in a reversed, more gradual process, turns into a woman's fourth husband.

I began the story but abandoned it when I awoke one morning to find Simon lying straight alongside me, his head perfectly aligned with mine. When I turned to look at him, he stretched out his neck to give me a peck, which smelled of gaseous fermented kibble. It was as if my tale had come true, and my common-law spouse was unemployed, eons younger than me, and of Germanic extraction. He was not a tall, dark, handsome prince under a spell but Simon, loaf-shaped, stubby-legged, beef-breathed, and neutered.

Simon is not some Kafkaesque husband, but he is a merry sidekick, a boon companion, a confederate in pleasures both simple and subtle, the finer, altogether nobler, half of me.

Melissa Pritchard is the author of three novels and four short-story collections, including The Odditorium, which comes out in January. She teaches at Arizona State University.

More Stories from New American Families
From the July 2011 issue of O, The Oprah Magazine