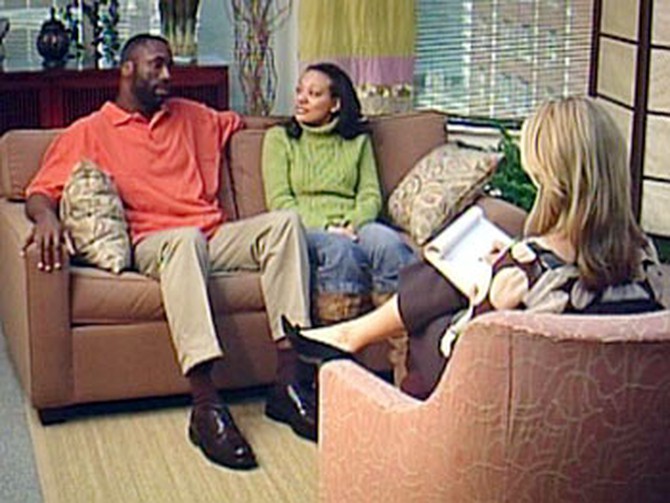 6 of 13
Marcus and Tamica have been married for four years. After the passion in their relationship started to fizzle, the couple turned to Dr. Berman for sex therapy.

One of Marcus and Tamica's biggest problems is that their sex drives don't match. "Tamica said to me once, which I never got, she said that my sex drive is frustrating to her," Marcus says. "My sex drive is no higher than it was when we first met and it was perfectly fine for you then, and hers changed and mine didn't."

For Marcus, lack of sex is a deal-breaker in marriage, but Tamica worries more about being financially secure. Growing up, Tamica says she struggled financially and was sometimes even hungry. Although Marcus and Tamica are comfortable financially, Tamica admits that she always wants more. "I felt like he could make more money. He could buy me a bigger house," she says. "I just wanted him to take care of everything. I didn't want any stressors at all."

Marcus says no dollar amount could bring them closer. "Even if we had all the money that you want us to have ... it will be something else," he says. "If you're not realistic, then we're not going to enjoy this marriage like we should."
Published 11/21/2008
PREVIOUS | NEXT
More Inspiration
Excerpt from Connect to Love
Education Meetups Across America
What's on Your Bucket List?
Tour the Bush's Crawford Retreat
Iyanla Vanzant: Back from the Brink
Sarah Ferguson's Life in Photos
Excerpt from Transition: The Story of How I Became a Man
Becoming Chaz Bono