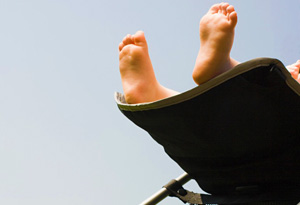 The moving story of how one woman channeled her own bitterness into a force for good by making a personal commitment to helping other people's kids.
"Spare some change? Something, anything! Trying to get something to eat."

My grocery store and the sidewalk outside, are always packed after work. With so many customers jammed together, it must have seemed an ideal place to beg. But with four plastic grocery bags already cutting into my hands, I wanted the walk home behind me. When a space opened in the crowd, I stepped by the beggar, avoiding his eye. But the light at the corner had just turned red.

"Come on," he said to passersby, more urgently. "Something. Anything!"

I wondered if he was anxious to gather enough money to get into one of the city homeless shelters that charges its occupants, before the place closed for curfew. Then his tone hit rage.

He went on, swearing, and I glanced back, fearing a brawl. But his target was a girl of about five, in layers of clothing. Her pink knapsack was open, and her little things had spilled onto the sidewalk. I turned back to the DON'T WALK sign and prayed for permission to WALK.

At times like these, the world seems its most unfair. I started trying late to have children, had trouble, and deeply missed what I couldn't have. Why are children given to people who abuse them? An imperative has grown inside me to protect others' kids.

About year ago, without planning to, I began mothering in public. I wasn't being a good samaritan; it was simply a way to relieve the bitterness. Riding the subway, I'd heard a teen-age mother shouting at her baby and wanted to rebuke her. But since scolding would only evoke more anger, I'd thought about what I could give.

"What a beautiful boy!" I said.

My remark distracted her, and for a moment she was confused. Then, as I went on cooing at her baby, she smiled and stroked his head.

A few months later, a big teenager on the subway was jostling for position with a petite girl. I'd thought they were playing, until her face flushed scarlet and she hurried away in tears. The car grew silent, his violence hanging in the air. Again, I thought: I can't let this go by.

"You know," I said, "you're really strong." His chest puffed out with pride. "Maybe you don't know how strong you are?" He looked startled; I had his attention. "You're so strong that everyone in this car is afraid of you." The tension broke, and people started talking again. By the time I got off, the kid was scribbling down the title of my novel—misspelling the word "disturbance"—which he wanted to buy.

But that evening, on the sidewalk outside the grocery story, I faced a large, angry man, not a teenager. Not a good recipe for sticking your two cents in.

Trapped at the light, as I stood listening, I remembered far back, to my father shouting in my sister's face. A picky eater, she had refused to eat an egg our mom had made because, instead of being perfectly flat, it had a bubble. My dad, a motherless boy raised by a poor, mean father, had made it through by joining the Marines. On my eight-year-old sister he was using the best parenting skills he knew.

Trauma is like a door that blows open too easily; strangers drag in pain, or a wild sense of threat, when you least expect it. My instinct, in these situations, is to run. But though no one would hold me responsible for that father and daughter, I couldn't bear to let him shout that girl into my past. And so, instead of crossing on the green, I set down my bags and turned to him.

"I'll give you twenty dollars," I said, "on the condition that you listen to a story." And I described the memory, the scene, he had evoked for me. As I talked I teared up, and then he teared up. I was 48, I said, and didn't have a family partly because I hadn't learned, in time, not to scream the way I'd been screamed at.

He looked down at his daughter and shuddered.

"She will remember every word of this," I said.

I handed him the twenty. His clothes stank a bit, but we hugged. And despite the bags I was carrying, I walked home, lighter.

In telling my shameful truth to a stranger, I didn't reach back and fix my own past. And that man, with his troubles, will probably shout at his daughter again. But despite all I can't fix in the world, in that one moment, I was able to put who I am to use, even if that person is not who I wish I had been.

Responsibility—the word feels so heavy that one wants to back away. But maybe it's just a simple decision to respond, to give what you have to someone who can use it.


Joyce Hackett is the author of Disturbance of the Inner Ear, a novel about healing from childhood trauma. Her novel-in-progress, Reconstruction, is about self-reinvention and -rewriting in the lives of Frederick Douglass and Susan B. Anthony.

This piece was originally published on ResponsibilityProject.com.