The Nicest Thing a Mother (or Anybody) Can Say 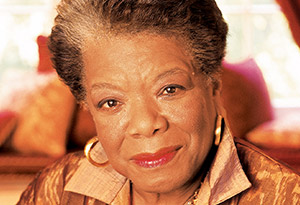 Photo: Dwight Carter
In her new memoir Mom & Me & Mom, Maya Angelou explains how she reconnected with the mother who abandoned her during her childhood, but who came to be a strong, vital force in her adult life. An Oprah.com Excerpt:
By the time I was twenty-two, I was living in San Francisco. I had a five-year-old son, two jobs, and two rented rooms, with cooking privileges down the hall. My landlady, Mrs. Jefferson, was kind and grandmotherly. She was a ready babysitter and insisted on providing dinner for her tenants. Her ways were so tender and her personality so sweet that no one was mean enough to discourage her disastrous culinary exploits. Spaghetti at her table, which was offered at least three times a week, was a mysterious red, white, and brown concoction. We would occasionally encounter an unidentifiable piece of meat hidden among the pasta. There was no money in my budget for restaurant food, so I and my son, Guy, were always loyal, if often unhappy, diners at Chez Jefferson.

My mother had moved into another large Victorian house, on Fulton Street, which she again filled with Gothic, heavily carved furniture. The upholstery on the sofa and occasional chairs was red-wine-colored mohair. Oriental rugs were placed throughout the house. She had a live-in employee, Poppa, who cleaned the house and sometimes filled in as cook helper.

Mother picked up Guy twice a week and took him to her house, where she fed him peaches and cream and hot dogs, but I only went to Fulton Street once a month and at an agreed-upon time.

She understood and encouraged my self-reliance and I looked forward eagerly to our standing appointment. On the occasion, she would cook one of my favorite dishes. One lunch date stands out in my mind. I call it Vivian's Red Rice Day.

When I arrived at the Fulton Street house my mother was dressed beautifully. Her makeup was perfect and she wore good jewelry. After we embraced, I washed my hands and we walked through her formal, dark dining room and into the large, bright kitchen.

Much of lunch was already on the kitchen table.

Vivian Baxter was very serious about her delicious meals.

On that long-ago Red Rice Day, my mother had offered me a crispy, dry-roasted capon, no dressing or gravy, and a simple lettuce salad, no tomatoes or cucumbers. A wide-mouthed bowl covered with a platter sat next to her plate.

She fervently blessed the food with a brief prayer and put her left hand on the platter and her right on the bowl. She turned the dishes over and gently loosened the bowl from its contents and revealed a tall mound of glistening red rice (my favorite food in the entire world) decorated with finely minced parsley and green stalks of scallions.

The chicken and salad do not feature so prominently in my tastebuds' memory, but each grain of red rice is emblazoned on the surface of my tongue forever.

More Inspiration
One Mother, One Son: How to Embrace Your Own Truth
Your Father, Yourself: 6 Women Look Back on Their Dads
Famous Kids Reflect on Why Mom Always Knows Best
Queen for a Day
From One Mother to Another
6 Ways to Survive Your Teenage Daughter
How a Hong Kong Alley Rat Changed a Young Couple's Life
And Billy Makes Five: What Happens When You Adopt a Grown Man?