What Comes After the Eating, the Praying and the Loving? 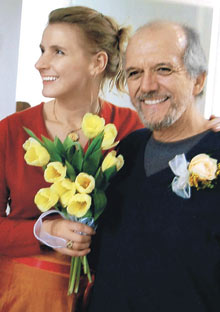 Photo: Courtesy of Elizabeth Gilbert
PAGE 2
LK: Eat, Pray, Love has sold seven million copies worldwide, and has been translated into 30 languages. Feeling any pressure with this next one?

LG: When somebody has an enormous success in this culture, people start asking two questions, which are "What are you doing now?" and "How are you going to beat that?" And I have to say, I love the assumption that your intention is to beat yourself constantly—that you're in battle against yourself. This sort of cannibalistic self-competition...this is largely why people Britney out.

LK: I'm so glad Britney is finally a verb.

LG: And you can make it a gerund: "I was trying to avoid Britneying out." I think I'm really fortunate that this happened to me when I was in my late 30s, not my early 20s. And it happened on my fourth book, not my first. And it happened after I had already gone through a depression, a divorce, years of therapy, a lot of self-reckoning, a spiritual journey. I was in the lucky situation of knowing who I was. And, more important, who I wasn't.

LG: Meaning I'm not what's being said about me, either in the highest praise or the highest criticism. I know I'm not a self-indulgent idiot; I also know I'm not the second coming of Deepak Chopra. If I had believed either of those, or both, as some people do when they get famous, that's when the mental illness arrives.

LK: Do you sense with this book that people are expecting Son of Eat, Pray, Love?

LG: People want three things simultaneously from your next endeavor: They love what you did, so they want more of that. But they also want it to be totally different, because you have to show that you're reinventing yourself, à la Madonna. And they want it to be better. The same, different, and better. So, no pressure there. Done and done.

I remember being in English class in college and we were discussing To Kill a Mockingbird. And this pimply-faced 19-year-old boy next to me goes, "Harper Lee—one-hit wonder." [Laughs] And I was like, there's something wrong with that. This isn't a pop song; if you have written the definitive 20th-century tome on racism, compassion, and forgiveness, you can take a pass for the rest of your life, if you want to just garden after that. You know, it's crazy. It's just so nuts.

LK: Before this version of Committed, you had completed a 500-page manuscript that you ultimately trashed. What was wrong with it?

LG: When I went back and looked at the first chapter, I could see so clearly, even sentence by sentence, where it was my authentic, current voice, interspersed with attempts to delight and entertain millions of readers whose names I don't know, by throwing in stuff that I thought they might like. Strained attempts at humor. Strained attempts at goofiness that wasn't really going on during the year I was writing about. It wasn't a goofy year. It was a pretty serious year, you know? It just didn't sound right; it just didn't feel right. So I took some time off, and found that my mind kept going back to the marriage book, just thinking, "I do want to tell this story. I just have to give myself permission to hope that my readers will grow up with me."

From the January 2010 issue of O, The Oprah Magazine
Please note: This is general information and is not intended to be legal advice. You should consult with your own financial advisor before making any major financial decisions, including investments or changes to your portfolio, and a qualified legal professional before executing any legal documents or taking any legal action. Harpo Productions, Inc., OWN: Oprah Winfrey Network, Discovery Communications LLC and their affiliated companies and entities are not responsible for any losses, damages or claims that may result from your financial or legal decisions.

More Inspiration
How to Win at Love
The Not-Perfect Marriage That Makes Us Believe in Love
He Cheated, She Stayed: One Woman's True Story of Getting Over Infidelity
Heartbreak Academy
When It's Time to Leave a Relationship
How to Make Romance Last
What It Really Takes to Stay Happily Married
The Kung Fu Secret to Getting Over a Bad Breakup