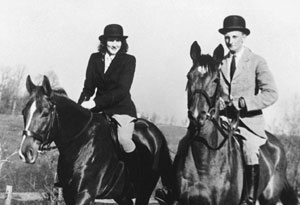 Photo: Courtesy of Zoe FitzGerald Carter
PAGE 5
"She seems mentally competent and fit. If I had any question about this, I wouldn't give it to her. The woman you passed on your way in came for the same thing and I said no."

"She was recently diagnosed with a degenerative eye condition that will eventually lead to blindness. She was upset, but I didn't think it was the right time for her to make such an important decision."

"But you think it is the right time for my mother?" I persisted.

By Tuesday night, my mother has become nearly invisible, having opted to starve herself. She hasn't eaten for 12 days. According to one of Dr. Harmon's pamphlets, cessation of food and drink was a "relatively quick and painless way to die" and less traumatic for the family than the sudden ingestion of drugs. The fact that she'd also attempted—and failed—to kill herself with an overdose of morphine four days earlier is all but forgotten. Death is finally under way.

Lying on the bed next to her, my arm around her waist, I sing to her, quietly but continually, one song after the next, convinced that she recognizes and is comforted by the sound of my voice.

"Shenandoah." "Red River Valley." "Shady Grove." My voice is soft and clear, the songs are exquisite and sad: the ones she sang to me when I was a child and, I imagine, were sung to her. Not by her parents, who were too glamorous and distracted to put their only child to bed—but by one of her beloved childhood nurses.

Most of the time I don't feel sad lying here, although sometimes the thought that I'm singing to my dying mother makes me tear up, as if I am watching myself in a movie.

I start the final chorus of "Wild Mountain Thyme." And we'll all go together / To pull wild mountain thyme / All around the purple heather.

Hannah leaves to call her husband, as I keep singing.

And then I stop.

Something feels different, something subtle, like a shift in temperature or a sudden absence of sound—sound you've been only vaguely aware of. I look around the room, trying to identify what's changed, but it looks the same. Everything is tidy and in its place. Her papers are put away. The visitors' chairs are pushed back against the bookshelf. The oxygen tank is unhooked and sitting in the corner. I look down at my mother, her profile etched darkly against the pillow. Is it her? Is she dead?

My eyes move down her body, find the gentle rise and fall of her ribs. Relieved, I lay my hand alongside her arm, feeling the hardness of bone, but sense no answering frequency, the "being there" that usually answers me when I touch her. That responding presence—her presence—is missing, like a background hum that's dropped away, or a breeze that's ceased to blow, leaving only still air behind.

Again, I have to look carefully to see that she's breathing.

Hannah has come back into the room. "Are you okay?" I ask.

She gives me a look that I cannot interpret. I wonder if she also feels this unsettling absence, but am too exhausted to ask.

Zoe's mother riding with her cousin, Conrad, in Virginia, 1946.
From the March 2010 issue of O, The Oprah Magazine

More Inspiration
Men Who Behave Dadly: The Life of the Full-Time Father
The Nicest Thing a Mother (or Anybody) Can Say
What I Found in My Mother's Journals—and Why It's Haunted Me Ever Since
From One Mother to Another
How to Raise the Men We'd Want to Marry
Into the Woods: An Idyllic Life in Rural Maine Undone by Tragic Loss
One Mother, One Son: How to Embrace Your Own Truth
Your Father, Yourself: 6 Women Look Back on Their Dads