Mothers and Daughters: Are You Overstepping Your Boundaries?

How do you walk that fine line between love and autonomy, privacy and intimacy? Amy Bloom has some experiences she wants to share.
By Amy Bloom 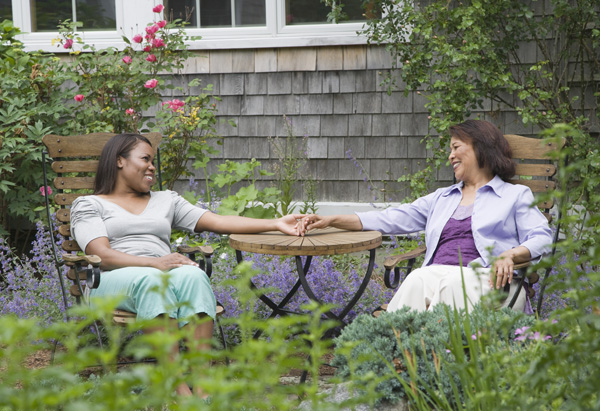 Photo: Photodisc/Thinkstock
Yes to sharing eye makeup, yes to sharing hairdressers, No to matching haircuts and outfits. Yes to helping each other avoid certain relatives, No to dishing about husbands or boyfriends or dating. Or Yes to dishing about all that (and even sex), No to lending money. Or Yes to lending money but No to telling the truth. Or Yes to all of the above but No to discussing the will, the custody agreement, the prenup, and all other painful legal documents.

The boundaries between mother and grown daughter are more complicated, more heartbreaking, more absurd, and far more slippery than even the most wiggly, unexpected border markings around our most rapidly shifting, emerging, and disappearing country-states. Our human boundaries contain...and they separate. They embrace...and they bar the door. They define...when they're not making definition just about impossible. They show us how self, family culture, and memory slide around, left to right, past to present. Mostly our boundaries show us where things have been (or may have been—since memory is such a notorious liar) and where they could be and, most maddeningly, or most comfortingly (depending on the day and hour), where things are with us.

Boundaries are the lines we draw that mark off our autonomy and that of other people, that protect our privacy and that of others. Boundaries allow for intimate connection without dissolving or losing one's sense of self. There are the professional boundaries (that'd be why you have to take your hand off my leg, Mr. Boss) and the personal ones. The same arm around a shoulder can be a violation of personal space or a much-appreciated gesture of affection, depending on where your boundaries are. Boundaries are about speech as well as action—what we say (mothers conjuring up images of specific sexual activity in conversation with their daughters are a boundary no-no, no matter what your personal style) as well as what we do.

What our mothers teach us that we then pass on

Because my grandmother used to confide in my mother, sometimes delicately and with hesitation, sometimes frankly and with tears, whenever she was disappointed in life, in America, in her husband, and because my grandfather also shared his worries and fears, my mother grew up burdened and concerned, an anxious peacemaker and a determined domestic juggler. My parents, who had both heard too much, made sure not to tell me a thing about their lives or feelings when I was growing up. I heard a little about my father's childhood in Brooklyn, and a hint that my beloved grandfather had not been much as a father; I heard about my parents' fateful meeting at the USO dance and not much about their life after that. The boundary around my parents' lives and marriage was firm and steady, but despite their best efforts to keep their private feelings private, there was—as there is for all of us—a certain amount of leakage.

I knew when someone in my house was unhappy, but I rarely knew why. I could tell the difference between a door kept shut in anger, one that meant 'I'm busy,' and another that meant 'I'm crying,' but no one ever mentioned the shut doors or their meanings. My parents kept their mouths shut to protect me, not to mystify me; they said things were fine because they wanted it to be so, not to make me doubt my own eyes. I understand this all a lot better now than I did then.

Here's what I think about parents and children, and it goes double for mothers and daughters: (1) You can't win. (2) Honest mistakes are better than indifference.

Mothers make daughters crazy with boundaries that leap and shift ('Don't talk to your father like that,' followed within hours by 'Do you know what your father had the nerve to say to me?'); daughters make mothers wary and nervous with the same, and we can all drive each other mad with the barbed and invisible boundaries around That Which Cannot Be Said.

I push my daughter's bangs back into alignment (that's what I think I am doing; I am also allowing myself the remembered pleasure of touching her when she was my property and I was hers, the days when I could, and had to, touch her from head to foot and dress her as I chose, the days when she licked my neck, as if I were ice cream and when she had to sit more than a foot away from me, she missed me). She flinches at the implied criticism. I pretend that I am surprised, that I cannot imagine how she could perceive implied criticism in such a mild, even helpful, act. It isn't really criticism, it's just acting affectionately on my observation that her bangs are not lying the way I know she would want them to. It's not as if I care, except that she is beautiful and, of course, even more so when her bangs are lying the right way, not going off in three different directions, which I am sure is not what she intended. You can see that—since I know that her own intention was to have the bangs look right, and I only fix them because I know that had she a mirror she would do it herself—there can be no suggestion of criticism. And that I still flinch when my own mother tugs on my bangs or smooths a spray of hair only because she knows I would smooth it had I a mirror, I know, and so do you.

How can one of my daughters (I have two, in their early 20s) say to me in the frostiest, most Prime-of-Maggie-Smith voice, 'I don't think that's something we should discuss' about something I most certainly think we should, something that, in fact, has direct bearing upon my plans or pocketbook, and two minutes later kiss me, take the very lingerie out of my hands, and say 'Thanks, Mommy, I don't have any clean,' as she leaves me there, whiplashed (and without underwear). Well, how can she not? Intimacy on many fronts does not entitle any of us to intimacy on all fronts, neither as subject nor object. The fact that I treat my daughter to a haircut whenever we're together and she needs or wants one does not entitle me to ask her how much she spends on haircuts when we're not. It does not entitle her to ask me why I spend so much money on my haircuts and so little on...(whatever she might prefer). These are what I think are good boundaries, and although we would both recover from the breaches, I think it's nice, even good and heartening, that we try not to tread on each other's autonomy and self...when possible.

Where boundaries fit into the mother-daughter dynamic
The kind of family boundaries I like (for it is a matter of taste, and I can imagine a compatible mother-daughter pair who prefer restrained affection and a moratorium on unpleasant subjects) are designed to foster intimacy and mutual respect, to forgive and recover from the inevitable trespasses, to treasure the good and let go of the bad. (And if there's too much bad, it's time for civility and polite distance, and if there's way too much bad, it's time to find yourself a surrogate mother or daughter.)

There are two kinds of families that work out their boundaries with a minimum of distress: the very healthy and the truly crazy. I aspire to the former, but sometimes when you see those crazy families in which you can hardly tell who's the mother and who's the teenager, in which everyone's tears flow and everyone's artifacts and accomplishments belong to everyone, in which the outside world is a horror and only the chaotic inner world of the family is safe—you know that you are seeing loving ties that bind and hold, even if no one's getting ahead in the mental-health marathon.

Good boundaries don't mean that we never hurt each other's feelings. Nor do they mean that my daughters don't feel free to comment on my appearance ('That's an old-lady jacket'; 'I think the gray has to go') in ways that I don't about theirs; it doesn't mean that I only offer advice when asked (I wish to God I could say that's how it is, but it's not, and my children would laugh themselves sick if I said it was), it doesn't mean that we don't have to cry and rage ('How could you...?'; 'I never meant...'), sorting out and talking through disappointment and hurt and misunderstanding and all of the other warts and bumps of being human. It means that we don't take undue advantage of each other in ways that demean or hurt the other, it means that mothers are not 'owed' anything but decency and their grown daughters do not have to be 'allowed' anything, and it means that one is allowed to keep the most private things private without being accused of withholding, and one is also allowed to share them without repercussions. Good boundaries mean the love is greater than etiquette or obligation but that love requires both—and that the rules for family life come from the heart as well as the head.

Amy Bloom, novelist and essayist, continues to struggle with boundaries like everyone else.

More on Mothers and Daughters
How close is too close?
One woman's up and down relationship with an overbearing mother
Mothers and daughters share what they've learned from each other
From the May 2003 issue of O, The Oprah Magazine