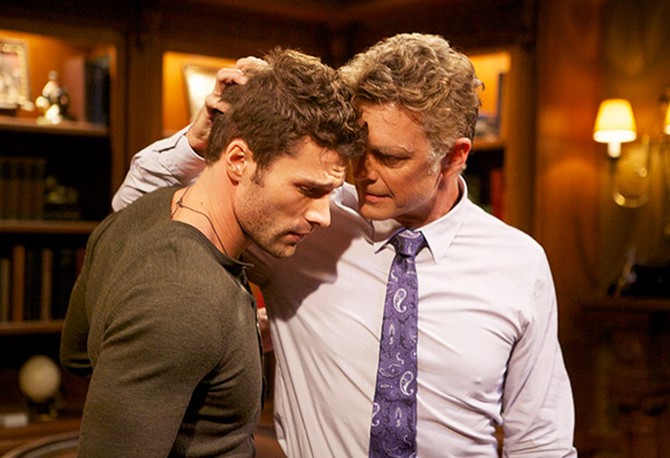 2 of 12
As Candace walks up the stairs, she is spotted by Jim's son, Wyatt, and his drug rehabilitation counselor, Jeffery, who has accompanied him home for the weekend. Wyatt confronts Candace, saying he heard the door lock behind her when she went in for an alleged study session with his father. "So you're screwing my father?" he says.

"You should ask him," she says. "Now's the perfect time. He's right behind you."

An angry Jim demands to see Wyatt in his study. "You think your father is screwing around on your mother with her?" he says.

"Well, she was in here a long time," Wyatt says.

"She was studying—something that you have never been too keen on. You know, getting a degree, bettering yourself? Remember that plan for your life that literally went up in a puff of heroin smoke?" Jim explodes. "How can you have the audacity to suggest such a thing?"

Jim won't let Wyatt speak. "Your mother and I have given you chance after chance. But when you start making these kinds of foolish, careless comments, you are bordering on losing it all," Jim says. "This is your last shot, pal. If you don't get clean—"

"Then stay clean," Jim says. "If you don't stay clean, you are out on your ass."

Jim orders Wyatt to leave. "And Wyatt? If you every make a comment like that again about me, I will break your neck," Jim says. "Now get out of my sight."