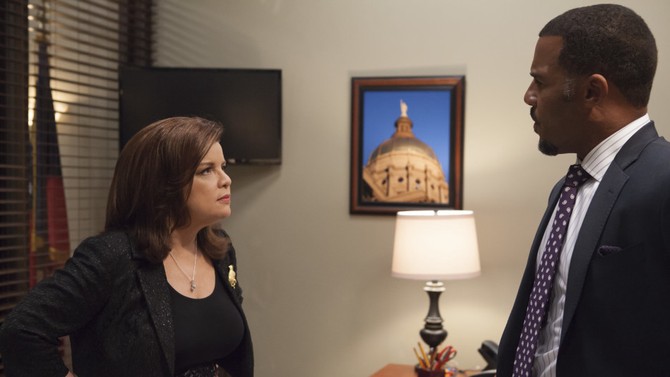 2 of 6
At campaign headquarters, Katheryn pays David a visit and demands to know why he isn't trying to get Jim and Veronica out of jail. David claims that he's working on a plan, but Katheryn already learned the truth from Judge Carter: David doesn't want his wife released.

Katheryn thinks he's punishing Veronica for her indiscretions, and she wants him to get past his wife's affair so they can all move on. "Get over it," Katheryn says. "We've all had them, including you, I'm sure. So, put on your big-boy pants and take care of business."

David admits that he wants her to stay in jail, but the reason isn't her infidelity. He refuses to elaborate further and, instead, turns the tables on Katheryn, probing her for information about Veronica's residence. Katheryn insists that she has no idea where Veronica lives.

After learning that Maggie Day had David released, Katheryn demands to know why she left Jim behind. Just then, Maggie arrives and explains that the situation was too contentious to afford both of their releases. Maggie warns Katheryn to distance herself as much as possible from Jim, but Katheryn refuses to turn her back on her husband.