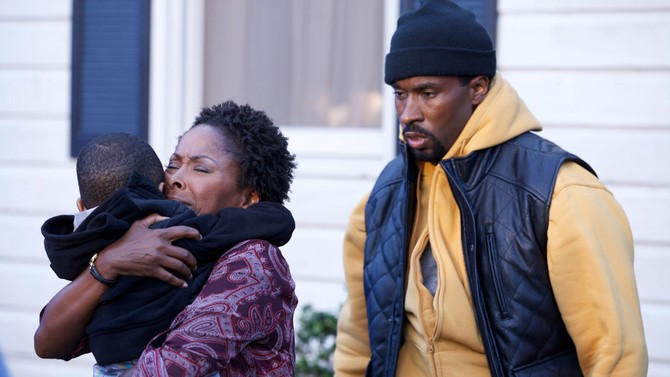 2 of 7
Hanna is on the phone making arrangements for Amanda's funeral when someone knocks on the door. It's Quincy, and he has Hanna's missing grandson, Quincy Jr. Hanna sobs as Quincy dangles the screaming child upside down, luring Hanna outside.

He hands Quincy Jr. over, letting Hanna hug her upset grandson, and then asks where Candace is. When Hanna says she doesn't know, Quincy wrests his son back from his distraught grandmother's arms. Hanna pulls at Quincy, begging him to give Quincy Jr. back, but gets a hard hit to the face for her trouble. Quincy drives off with his son, and Hanna is left wailing in the front yard.

Later, Benny comes home and discovers that Hanna has been roughed up. After some reluctance, Hanna tells him what happened with Quincy and that she called the police. To her dismay, Benny storms out of the house in a rage.