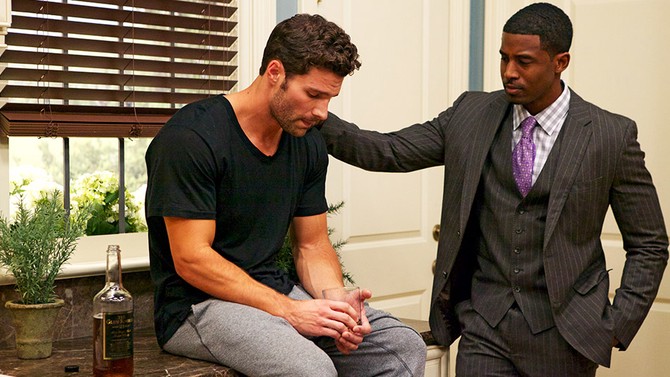 Wyatt has just told Jeffery about his plans to expose his family's plot to cover up his crime, and Jim has overheard everything. As Jim confronts his son, Katheryn, Veronica and David rush in to prevent the situation from spinning out of control. When Wyatt reaches for a bottle of scotch, however, Jim snaps, grabbing his son and pouring the bottle's contents over his head. The two exchange blows until they're pulled apart, and Wyatt exclaims that he knows about all his father's affairs. Wyatt goes upstairs, and Jeffery starts to follow, but Veronica tells him to go home.

At the Sarandon Hotel, Candace gets a call from her brother, who says he's bringing Hanna over. Candace isn't happy, but she reluctantly agrees. After she hangs up, she gets a call from Jeffery, whom she's been trying to contact for more information about Amanda's death. Jeffery accuses Candace of not really caring about Amanda, but Candace insists that Amanda was her friend and that she feels terrible. Jeffery reveals that Amanda was upset upon learning of Candace and Jim's affair, but he tells Candace that he believes there must have been another factor that made Amanda snap. 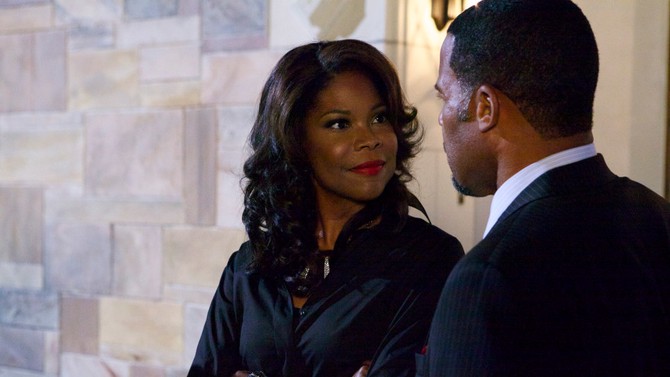 Outside the Cryers' mansion, Veronica is on the phone with her doctor, asking for a prescription. She explains that her friend is going through a tough time and could use something to help. She hangs up as David comes out, scolding her for still meddling in Jeffery's life. He says he's going to call Melissa and tell her that Jeffery is gay, ending the whole charade. Veronica challenges him, offering to dial up the young woman herself.

David comes through on his vow and tells Melissa that his son is gay and that she should find someone else. To David's surprise, Melissa says that, nonetheless, she really likes Jeffery and that she'll make him like her too. As she ends the conversation with the Harringtons, however, we see that she's in a hospital room, watching over an unconscious man.

Puzzled after getting off the phone, David isn't quite sure what's going on with this mysterious young woman—but he knows Veronica is somehow involved. 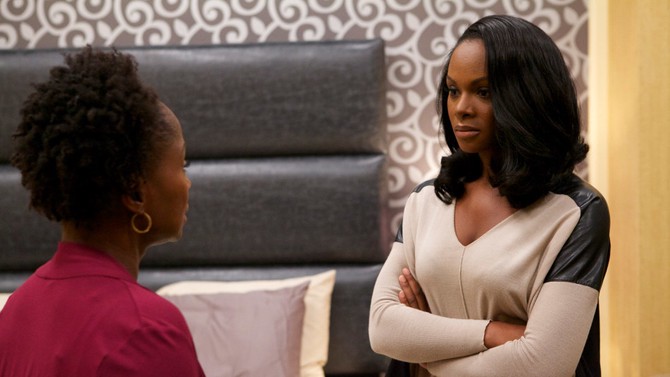 Hanna and Benny arrive at the hotel, and Candace is immediately combative with her mother. This time, however, Hanna doesn't want to fight. She wants to apologize for a mistake she made a long time ago, when Candace was only 5 years old.

Hanna tells Candace that she had a boyfriend named Marvin at the time, and he had been molesting Candace. Hanna says she called the police, but Candace says she remembers things differently, that Marvin left Hanna. Hanna insists that wasn't the case—she called the police and Marvin ran, but he was caught and thrown in jail. When Candace asks why Hanna is bringing the incident up now, Hanna says it's because of Amanda.

"She had some things that happened to her when she was a little girl too," Hanna says. "And I just keep thinking maybe if you got some help for some of this stuff your life would be better. You'd be better."

Candace insists she's fine, but Hanna says she's not fine if she's living in a hotel paid for with the ill-gotten gains from her latest con. Benny, who has been taken off guard by his mother's confession, says Candace secured a legitimate job, but Hanna doesn't believe it. She goes on to say that after seeing Candace argue for Benny in court, she believes Candace could be an exceptional lawyer.

"Are you done?" Candace says flatly.

Hanna hugs her daughter, and Candace begins to cry, but a moment later she tells her mother to leave. 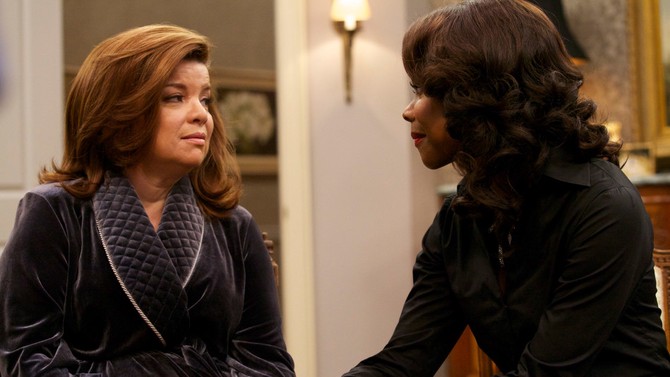 Back at the Cryer mansion, Veronica sits with Katheryn as she ruminates on Amanda's upbringing and how she always wanted her to be perfect.

"They're individuals. They come to us that way, with their own minds and opinions and thoughts and flaws," she says sadly. "The more we try to control them, the more they become themselves."

Suddenly she turns to her friend. "Jeffery is gay, Veronica," she says.

Veronica is taken aback and tries to put the comment aside, but Katheryn insists on being heard, telling her friend that she can't change her son. Finally, Veronica responds by saying that they raised their children very differently. Now Katheryn is jarred and asks Veronica what she means. But Veronica dodges again, claiming that it's late and that she needs to go home. 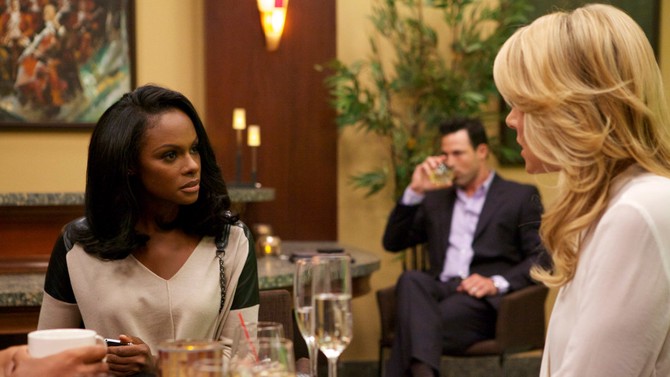 At the Sarandon, Maggie arrives to find Landon drunk in the bar. She tells him that Jim's polling numbers are up after the tragedy and that she needs him back on the job with bells on. Landon is put off by Maggie's attitude and her request, but Maggie points out that Landon has only himself to blame for his troubles after trying to sabotage Veronica at the press conference.

Their conversation is interrupted as Candace enters the bar, in need of a drink after the encounter with her mother. Unceremoniously, she informs Maggie that she's in her seat. When Maggie refuses to get up, Landon grabs another chair, and Candace seats herself.

To Maggie's surprise, Candace asks how Jim is. She's even more shocked and dismayed when Candace says she's going over to the would-be governor's house in the morning. Maggie tells her she can't go, but Candace only throws Maggie's indiscretions with David in her face.

"You don't look like you're any match for that Veronica. She is full of testosterone," Candace sneers.

Having had enough, Maggie gets up, and Candace triumphantly takes her seat.

At the Cryer mansion, David gets a call from Maggie, who informs him of Candace's plan to visit the following morning. He asks where Candace is and tells Maggie he'll meet her at the hotel.

Jeffery comes home to his darkened apartment to find a man in his bed. Assuming Candace has actually sent a man over this time, he turns on the lights and brusquely wakes the man. However, his frustration turns to fear when he sees that Quincy is the trespasser. When Quincy asks where Candace is, Jeffery lies and says he doesn't know. Quincy grabs Jeffery and demands that he call Candace, but Jeffery refuses.

"Your mother didn't tell me you had heart," Quincy says.

Shocked, Jeffery asks how Quincy knows his mother. Quincy informs him that Veronica is the one who sprung him from prison to hunt Candace down. Hearing this, Jeffery says he'll make the call, but he dials his mother instead.

Veronica doesn't play dumb; she simply seems exasperated to have Jeffery on the phone. "Jeffery, he won't hurt you. Just tell him where that girl is," she says.

Jeffery says he can't do that.

"Okay," Veronica says. "Then he will hurt you."

Veronica hangs up on a flabbergasted Jeffery, and Quincy advances again. Jeffery gets in a few good punches, but Quincy quickly overcomes him, landing a barrage of devastating blows.