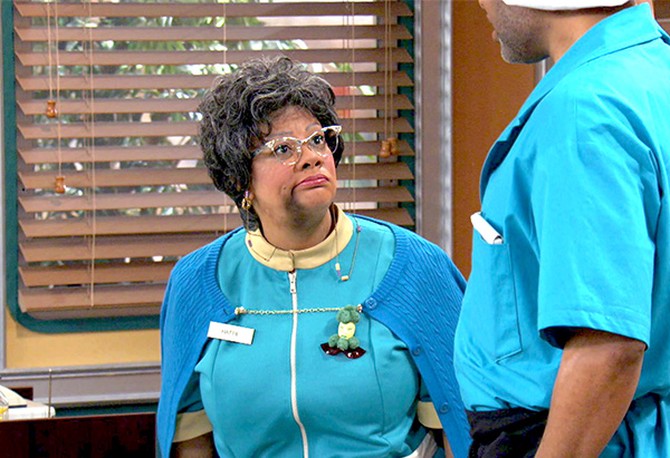 Hattie Mae Love storms into the Love Train Diner and screams. Frightened by the sound, Floyd comes to see what the matter is. Hattie reveals to Floyd that she is livid at the fact that Vivian, her archnemesis and rival restaurant owner, has put up a billboard across the street from her diner, which reads, "Eat at Vivian's Diner because the Love Train Diner has been shut down by the Board of Health."

Hattie threatens to sue Vivian for libel, but Floyd reminds Hattie about the fact that the diner was shut down—albeit only for 24 hours—by the Board of Health, so there are technically no lies on the billboard. Questioning whose side Floyd is on, Hattie assures him that she's gotten the last laugh. Floyd eyes Hattie, who has a suspicious-looking black streak on her chin and on her hand, and asks, "What did you do?"

"Look at it," Hattie says. "Read it," referring to the sign.

Floyd goes to the window to read the sign and realizes that Hattie has spray-painted over the word "Vivian" with another v-word—the one for a specific part of the female anatomy. Upon reading the beginning of the word out loud, Floyd has had enough and sends Hattie back to the kitchen to clean up and get ready to work. 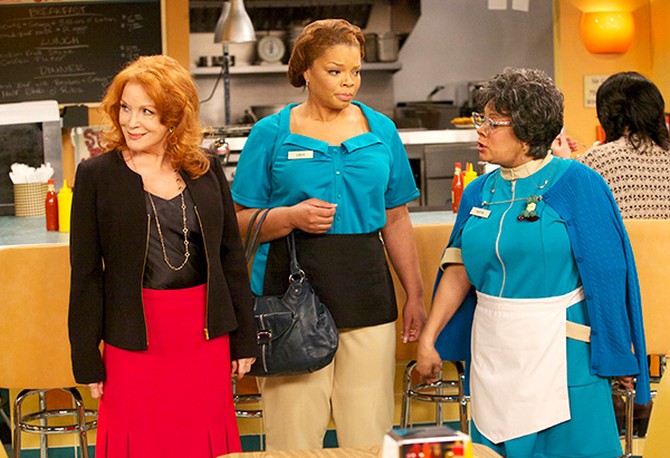 A short while later, Floyd questions Hattie on how she achieved the feat of getting 80 feet up in the air to deface Vivian's billboard, when Hattie reminds him that she used to be in the circus. Just then, Vivian storms into the diner, pointing her finger right at Hattie.

"There you are! You destroyed my property!" Vivian says.

"And you shouldn't have put it up that high in the air!" Hattie says.

"Who made you keeper of records?" Hattie says.

Linda arrives for work and realizes that Vivian and Linda are at it again. She tries to step in between them in hopes of breaking up the fight. When Vivian informs Linda of what has happened, Linda asks her mother if it's true. Hattie denies the whole thing, saying that there's no way a little old granny such as herself could climb 100 feet up into the air. Vivian, not buying this, points out the evidence: the spray paint right on Hattie's face. 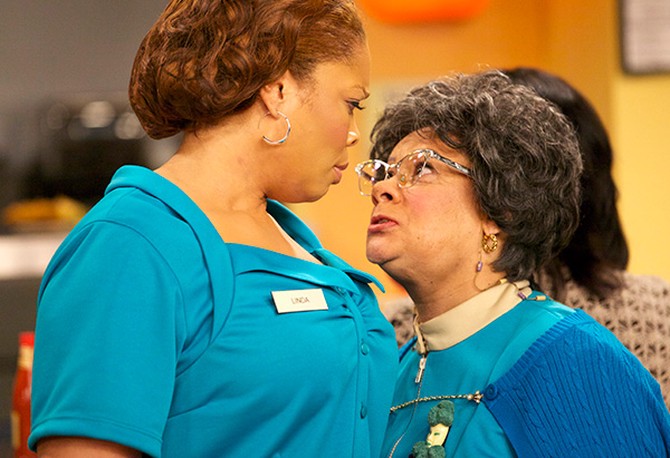 After unsuccessful attempts at convincing Vivian that Hattie had nothing to do with the vandalism of her billboard, Vivian storms off, vowing that she will get the Love Train Diner shut down. Hattie, not to be outdone, fires right back at Vivian, and says, "And you better be careful that your place don't burn down."

After Vivian exits the diner in a huff, Linda tries to reason with Hattie.

"Mama, you and that lady need to learn how to get along!" Linda says.

"Do I look like I'm in the mood for kumbayas?" Hattie says. She too storms off, in the opposite direction.

Linda, Danny and Floyd return from the movies, with the boys pretending that they enjoyed the film they just saw. Linda learns that Danny actually fell asleep at the movie that she loved and vowed to see again, and asks why they even bother to go to the movies with her. Danny admits that, again, perhaps they are spending a bit too much time together as mother and son.

Rather than argue about spending time with Linda at the movies, Danny and Floyd turn on the TV for a basketball game. They are instantly into the game, cheering at what they see on TV. Now, it's Linda's turn to be dissatisfied by the choice of entertainment. 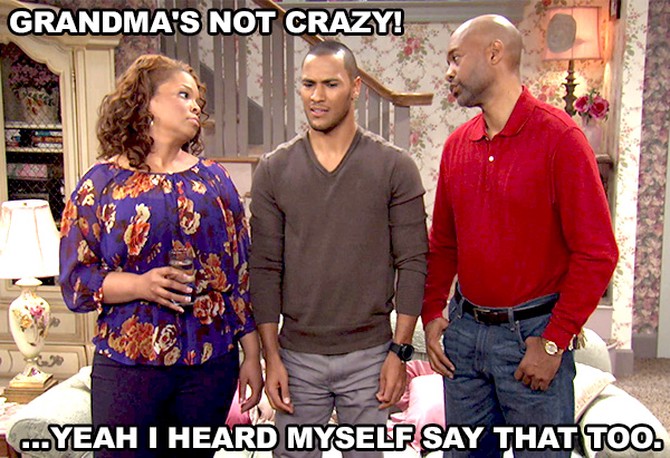 The three are only moments into the game when a breaking news report comes on and interrupts it. An anchorwoman's voice says, "We interrupt this program to bring you breaking news. Vivian's Diner, a staple in the community for many years, has been ravaged by fire and burned to the ground." Upon hearing this, Linda, Danny and Floyd stand up in unison and cock their heads at the television set.

The three immediately inquire if anyone knows where Hattie is, staring in disbelief at the news they are watching.

"Oh, no," says Floyd, "look at the flames. That's a gasoline fire right there."

"Where is my mother?" Linda says.

After a bit more discussion, Danny says, "Oh, come on, Grandma's not crazy!" Then, after a pause, he says, "Yeah, I heard myself say that too," and shakes his head. 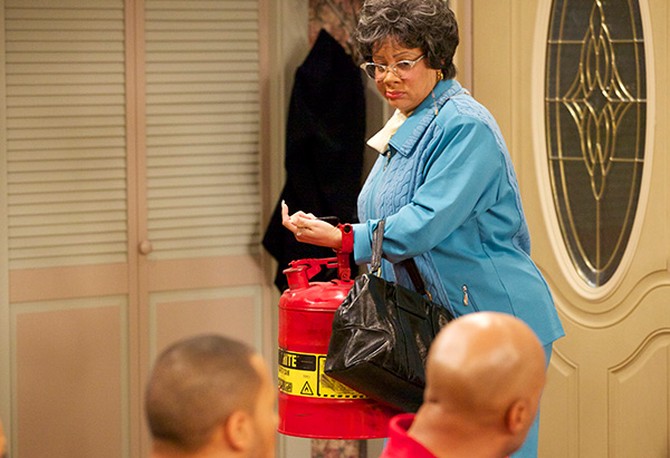 Hattie comes home and walks right by Linda, Floyd and Danny, still watching the news on the couch. She is carrying a large gas can. She greets them quietly and quickly makes her way to the kitchen with the can.

"What is she doing with a gas can?" Linda asks Floyd after Hattie is in the kitchen. 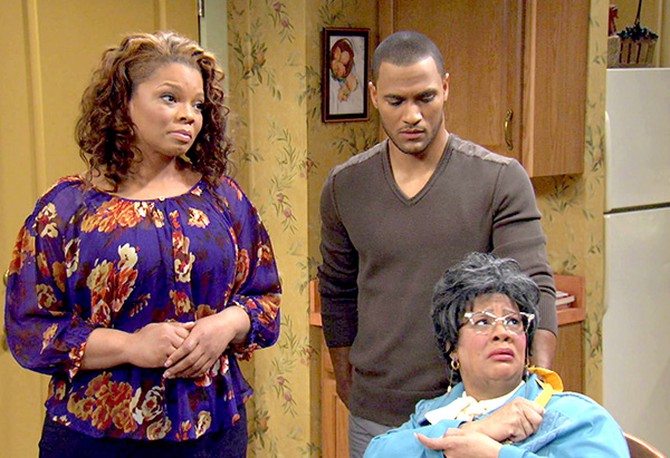 The family follows Hattie into the kitchen and inquires about the gas can. Hattie tells them that she ran out of gas because Floyd was supposed to fix the gas needle on her car but that he didn't, so she never knows when she's going to run out of gas and have to walk to the nearest station to fill up.

Linda is satisfied with this answer, and Floyd proceeds to tell Hattie the real reason behind their inquiry: "Vivian's restaurant burned down," he says.

"Mama, this is not a good thing!" Linda says. Everyone proceeds to remind Hattie that everyone in the diner heard Hattie threaten to burn down Vivian's Diner when they had their argument earlier, and Linda tells Hattie that she's got to get a lawyer. All the while, Hattie holds firm to her claim that she had nothing to do with the fire. 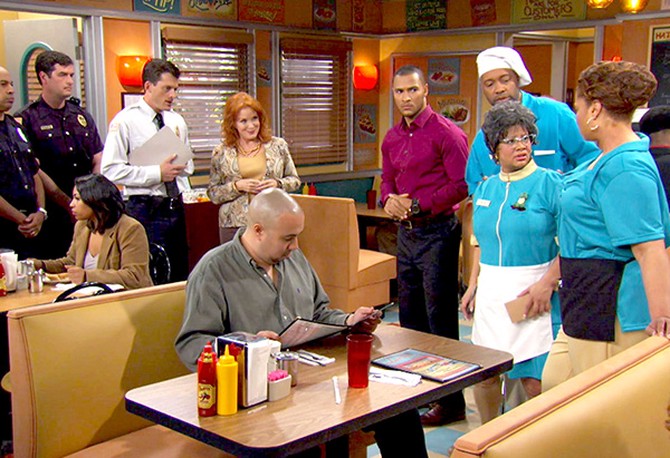 Later in the week, the Love Train Diner is booming with business, and Hattie is skipping around her restaurant with joy. Danny comes in and informs Linda and Floyd that he's learned that the police suspect foul play in the case of the fire.

Danny and Linda decide to try to get Hattie to confess to the crime, thinking it will make it easier for her in the long run. Danny's attempt is unsuccessful, so Floyd takes his turn. But before Floyd can get his question out, Vivian storms in, accusing Hattie of arson. Vivian says that the investigators and the police are on their way over to investigate Hattie.

On cue, the investigators come into the Love Train Diner and announce in front of everyone who the culprit was in the fire: "It actually started because your grease trap had not been cleaned in months," the investigator says to Vivian. "The flames went all the way up the wall."

"What?" Vivian says, in shock.

"I'm sorry," the investigator says, "and the insurance companies don't usually cover this."

Vivian, breaking down into tears, runs out of the restaurant.

Later that night, Hattie gets a much-deserved apology from Linda, Danny and even Floyd for ever accusing her of setting the fire in the first place, and the three share a moment of relief at the whole saga being over.
Published 06/20/2013