The Shocking State of Our Schools 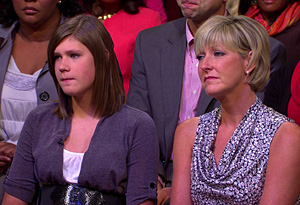 PAGE 8
Emily is another child featured in Waiting For "Superman" who entered a lottery for the chance to attend a charter school rather than the public high school in her neighborhood. She was one of the lucky few who got chosen.

Because of something called "tracking," which many schools do, Emily explains that she would not have received the opportunity to take advanced classes.

"Many families and their children are unaware that their academic future will be decided by a school official who will place them on a track," Davis says. "Lower tracks have lower expectations and often worse teachers, so students placed on lower tracks often find they are running fast but falling behind."

"I'm very smart and intellectual, but I don't test well," Emily says. "If I had gone to my neighborhood school, I would have been put in the low classes. I'd be on the road to failure."

Now, Emily is at Summit Prep, a charter school that does not track its students or group them based on academic ability.
Published 09/20/2010
Please note that Harpo Productions, Inc., OWN: Oprah Winfrey Network, Discovery Communications LLC and their affiliated companies and entities have no affiliation with and do not endorse those entities or websites referenced above, which are provided solely as a courtesy. Please conduct your own independent investigation (including an investigation as to whether any contributions are tax deductible) before donating to any charity, project or organization. This information is provided for your reference only.