The Oprah Show Guests We Can't Stop Talking About 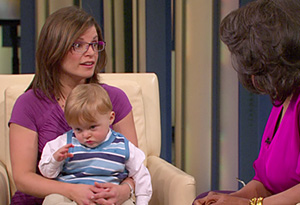 PAGE 9
It took until the 24th season, but in February 2010, The Oprah Show experienced another first: An audience member named Lori went into labor and had to be taken to the hospital by ambulance.

Today, Lori and 1-year-old Justin are back at Harpo Studios! Lori says her labor was unexpected because she wasn't due for three months, but Justin was born minutes after she got to the hospital. Because it was such a premature delivery, Justin and Lori had to stay in the hospital for four weeks. Yet, besides asthma—which doctors say he will grow out of, hopefully—Lori says Justin is a healthy baby. "He's perfect," she says.

Published 04/08/2011
As a reminder, always consult your doctor for medical advice and treatment before starting any program.