The Brilliant Mind Behind Harry Potter 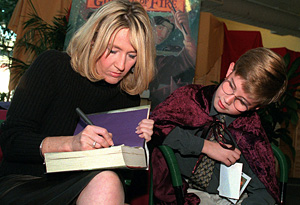 Photo: AP Images
PAGE 2
It took years of writing compulsively—through her childhood and into her early 20s—before Jo found the right story to tell. At age 25, Jo was riding on a delayed train from Manchester to London when one single idea flashed into her mind: Boy doesn't know he's a wizard, goes to wizard school. After that, Jo says her mind was flooded with ideas for Harry Potter.

In Harry Potter and the Sorcerer's Stone, Jo first introduced the world to Harry Potter—a boy who appears perfectly ordinary to "Muggles" (non-magic people). However, in the wizarding world, he's a legend. Harry spends the first 11 years of his life living with his dreadful Muggle aunt and uncle, completely unaware that he's a wizard and that there's an extraordinary destiny awaiting him. As the story says, "One day, every child in the world will know his name."

While there was no way Jo could have predicted that every child in the world would one day know her name as well, she said she did have an epiphany while writing the first Harry Potter book.

"I had this moment where I suddenly thought—it was like another voice speaking to me—and the voice said: 'The difficult thing is going to be to get published. If it's published, it will be huge,'" she says. "And that is exactly what it was."
Published 10/01/2010