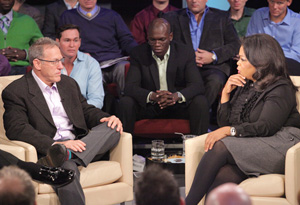 Photo: George Burns/Harpo Studios
PAGE 4
According to our informal poll, 81 percent of the men in the audience say they have contemplated suicide. Thirty-three percent of these men actually attempted to take their own lives, including Tyler. When he was just 11 years old, Tyler says he slit his own wrists. "It was all too much having to carry the shame of it, not being able to talk about it," he says.

Dr. Fradkin says this is a horrifying statistic. "That speaks volumes to the pain that's out there," he tells the survivors. "I'm thankful that all of you survived, that all of you had the courage."

Many male survivors struggle with depression, Dr. Fradkin says, because abuse is a betrayal that's devastatingly shameful. "Their manhood was taken. Their spirituality was taken. Their ability to connect in a safe way was taken," he says. "They feel no safety in the world, and suicide seems like a safe alternative. Of course, it's not. But in their minds, that sometimes is the only option because there's no one to turn to. There's no one to tell."