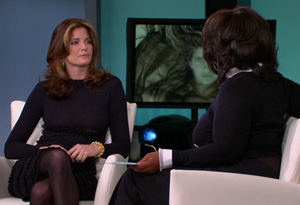 PAGE 4
Fabulous at 42, Stephanie is the mother of four children, ranging in age from 6 to 21 years old. "I always wanted to be a mommy," she says.

For the past few years, however, Stephanie's personal life has been tabloid fodder. She and her husband, Peter Brant, were in the throes of what seemed to be a bitter divorce, complete with name-calling and ugly accusations, until they recently decided to reconcile. "I had an epiphany," Stephanie says. "[I] went to my husband's house with a sort of peace offering. ... I just said to him, 'We both love our children too much to let this go on any further.' Most of what's said in the press really is nonsense, and we just decided then and there to reconcile and work things out between the two of us."

Stephanie also got bloggers buzzing recently when a photographer snapped a private moment Stephanie shared with her 17-year-old son, Peter. While on vacation in St. Barths, Stephanie and Peter embraced on the beach, and a writer described the moment as "strangely intimate."

Stephanie says the media's response is a misinterpretation. "I've gone through a lot in the past two years, and I gained a lot of weight, and it really upset me. So I spent two days indoors, and when I came out and finally decided to just go outside, my son was so happy to see me," she says. "He was wooing me and gave me a big hug and a kiss, and we had no idea that that one second would be turned into something that could ever be thought of as [inappropriate]. He's my baby. He's a gorgeous young man, but he's my baby."