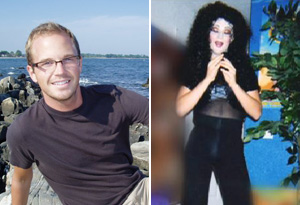 Over the years, Oprah and her team have hooked up deserving fans with college scholarships, once-in-a-lifetime opportunities and dinners with all-star athletes. And who can forget Oprah's "you get a car!" giveaway?

Oprah says she loves to make dreams come true...but it's not as easy as it looks. "My producers spend weeks and weeks planning, coordinating, plotting, scheming every little detail," she says. "Then, they sit on pins and needles hoping to pull off the ultimate surprise hookups."

When it's time for the big reveal, Oprah says you never know how someone will react. Josh, a massage therapist and Cher enthusiast from Portland, Oregon, didn't disappoint.

After learning about Josh's love for music superstar Cher—he even dresses up as her for fun—Oprah's team worked with his partner, Rob, to orchestrate a special surprise.

"I'm about to surprise him with something that is going to totally blow his mind," Rob says. "I'm about to go inside and tell him that The Oprah Show is sending us to see Cher in Las Vegas. He's going to freak out."

When Josh gets the good news, he can barely contain his excitement. After a few happy tears, Josh packs his bags and heads to the airport with Rob. 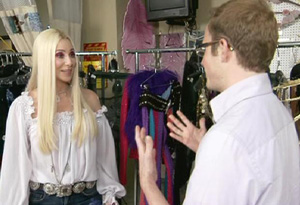 A few hours after a Harpo camera crew came through their front door, Josh and Rob arrive in Las Vegas and head to Caesars Palace, home of Cher's cutting-edge stage show. "In your fantasies, you dream about this," Josh says.

After getting the VIP treatment at Caesars, it's finally showtime. Josh and Rob are seated near the back of the Colosseum, but that doesn't damper Josh's excitement. "I'm at the edge of my seat," he says. "The show hasn't started yet."

Cher takes the stage in a fabulous Bob Mackie design and begins the show. Josh thinks his hookup is complete, but little does he know, this music legend has something up her sleeve.

Suddenly, a spotlight shines down on Josh, and Cher calls him down to the front row! "You getting here comes from Oprah, and you sitting here in these seats comes from me," she says. "Get your surprised ass down here."

The best part? After the final song, Josh is invited backstage to meet his idol. Finally, after years of emulating Cher, Josh gets the chance to express his admiration. "You have been such an inspiration to me. You have made me feel so comfortable in my own skin, and you have allowed me to love myself," he says. "You have fed me that energy through your music, through your performances, through just being Cher." 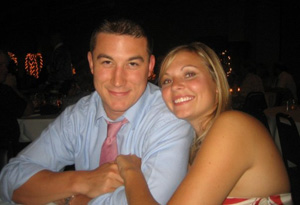 Oprah's next hookup starts with a letter from a mom in Louisville, Kentucky. Just three weeks before her daughter Julie's wedding, Mom writes in to reveal details about Julie's first love—Justin Timberlake.

"Everyone who knows her, including her fiancé, knows that ever since she was 12, her first crush was Justin Timberlake. She's 26 now, but to this day, when she sees his picture or hears his name, she becomes a J.T.-crazy teenager again," Mom writes. "Julie would just lose her mind if she got the chance to meet Justin, and I think it would be a great wedding present."

Oprah's team enlists Mike, Julie's fiancé, to help pull one over on her. Mike whisks Julie away to Los Angeles and plans a day of golfing, a passion he shares with Justin.

Mike tells Julie she's getting a lesson from a "golf pro," but this is one tee time she'll never forget! "What she doesn't know is that I'm going to be her golf pro," Justin says. "I'm not much of a pro, but we will have fun." 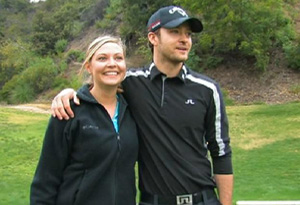 As cameras watch from afar, Julie practices her swing and waits for her instructor. Then, she sees her lifelong crush, Justin, coming her way.

Some surprised fans scream and cry, but not Julie. She's almost too stunned to speak, let alone play 18 holes with Justin. "He's the one person I always wanted to meet, and you always think about what you would do. How would you act? And that completely went out the window," she says. "I was in shock. It all happened so, so fast."

Inside, Julie says she was screaming and jumping, but on the outside, she played it cool. Julie says she didn't even get a chance to tell him "thank you."

"I was too worried about looking like an idiot on the golf course," she says. 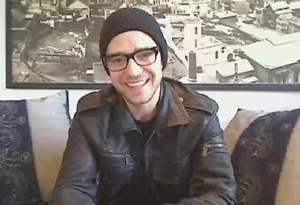 Well, Julie is getting a second chance to tell Justin what this hookup meant to her. Justin joins the conversation via Skype™ from his office in Los Angeles.

"Justin, I just want to say thank you, of course, for taking the time to do that for me. You have been a part of my life for as far as I can remember," she says. "You're so good at what you do, but you're so humble at the same time, and that really means a lot. You exceeded all of my expectations, and it was so great to get to finally meet you."

Justin is thousands of miles away, but he sent along a few more surprises for the happy couple. "It's great to see two people that really care about each other as much as you guys do," he says. "As sort of a wedding gift from me, I'm having the grand opening of my course, Miramichi, in Memphis in July, and I wanted to invite you guys to be my special guests. We can have some good Memphis barbecue, and we can hang out for a day or two."

To make the most of Justin's eco-friendly course, he and his friends at Callaway Golf also give Mike and Julie new sets of his-and-hers clubs! 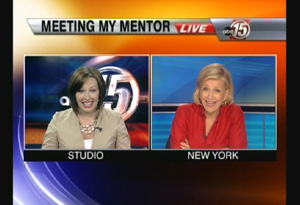 Diane Sawyer is one of the hardest-working women in the news business, but between broadcasts, she makes time for her biggest fans.

For years, Bridget Shanahan, a newscaster in Champaign, Illinois, has looked up to Diane, a woman she calls her hero. So you can imagine her surprise when Diane popped up on her screen during a morning broadcast!

At first, Bridget keeps her cool while reading this fictional news report on live TV. "In our next story, an unsuspecting local woman gets hooked up after her mom writes a letter to Oprah Winfrey," she reads. "She's going to get a chance to meet her lifelong hero and mentor right now, as she's sitting at this desk and in this chair."

When Diane appears on the monitor, Bridget can't believe her eyes. "I am just stunned. I love you," she says. "Oh my gosh."

Diane shares some words of encouragement with this young newscaster. "As long as what you care about on the inside is matched by what you're doing on the outside, you've got rocket fuel for a lifetime of happiness in this work," she says. "I can't wait to watch you do it."

To complete the hookup, Diane invites Bridget to come visit her on the set of ABC's World News! 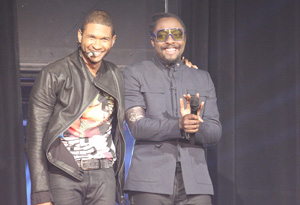 Oprah has one final hookup in store for her audience. As a special surprise, R&B superstar Usher joins will.i.am on stage to perform their hit "OMG."

Since Usher first rose to fame in the late '90s, he's sold more than 45 million albums around the world. "It's somewhat of a dichotomy to live fantasy and reality, but I manage it," he says.

His latest album, Raymond v. Raymond, is in stores now.

Published 05/10/2010
Please note that Harpo Productions, Inc., OWN: Oprah Winfrey Network, Discovery Communications LLC and their affiliated companies and entities have no affiliation with and do not endorse those entities or websites referenced above, which are provided solely as a courtesy. Please conduct your own independent investigation (including an investigation as to whether any contributions are tax deductible) before donating to any charity, project or organization. This information is provided for your reference only.