Russell Crowe Takes on a Legend 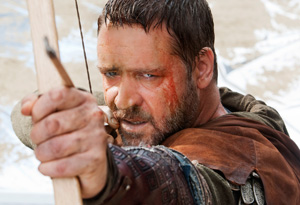 Photo: Universal Pictures
Russell Crowe has made a name for himself playing a slew of fascinating characters, from a hard-nosed boxer in Cinderella Man to a schizophrenic mathematician in A Beautiful Mind. In his latest film, Russell reunited with Gladiator director Ridley Scott and draws his bow as the legendary hero Robin Hood.

Russell says he spent a lot of time preparing to play the iconic figure. "We wanted to really understand where the mythology had started from," he says. "It became apparent to us that the difference between the hundred years of cinema and the previous 800 years of story being handed down from mythology to legend to a political tool to a tool of the church to a parlor game when King Henry VIII was in power, you know, it just seemed to us that there was something intrinsic about that story that we should maybe wipe away all that other stuff and get back to the core."

Though he says he's not a perfectionist, he does try to always do his best. "That is a central tenet," he says. "Every single day on a movie set I just get up and I try to do something special." 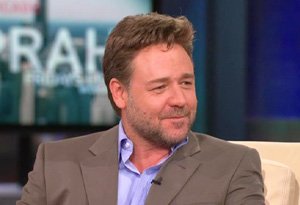 Shooting Robin Hood took 100 days, but Russell says it was a lot of fun. "You sort of get beaten up a lot, but I love being on Ridley Scott movies because they work well," he says. "[Ridley's] so well organized, and that's one of the things people don't understand, because I come from a simple, working-class background and he has the same background that, you know, yes, he makes expensive movies, but he ensures that they don't cost a dollar more than they should cost. And I like that about him. I like that he's not cavalier. I like that he knows exactly how many severed heads he has in the effects department."

Despite a few severed heads, Russell says Ridley made the decision early on to make Robin Hood appropriate for younger audiences. Russell even took his two sons, 6-year-old Charlie and 3-year-old Tennyson, to see it. "They were so jazzed because this has been in their life for two and a half years, so the nervous energy was pumping," he says. "So we sit down, the movie finally starts. Within five minutes, my oldest boy, Charlie, goes, 'Oh Dad, can we go now?'" 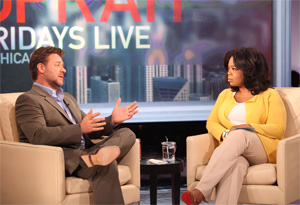 There's a key saying in Robin Hood, "Rise and rise again until lambs become lions," which Russell says basically means "Never give up." The universality is what makes it so central to the movie, Russell says. "It's applicable to anybody in any pursuit," he says.

Russell has played tons of riveting characters, and he says that has perhaps contributed to the biggest misconception about him. "[People think] I'm an angry person. I'm not really," he says. "I played a lot of angry men when I was young. I played skinheads and disgruntled cops and all this sort of stuff. And, quite frankly, I think the problem was I'm not a very interesting person. I'm just not. I play interesting roles and I put a lot of effort into the roles and stuff, but I kind of left a big gap between who I really was and the characters that I was playing and, over time, that area just got filled in." 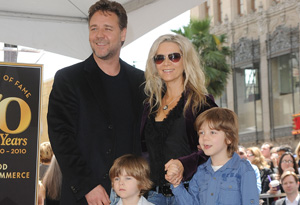 Photo: Getty Images
Russell's co-star and romantic interest in Robin Hood is Oscar® winner Cate Blanchett. "When we started to reshape the story, we needed a Marian who had to be an individually strong woman," he says. "The thing about Cate, you see the characters that she plays and I think the assumption about Cate is that for some reason she's not a warm person. But I can tell you that that's not true."

Cate may be his onscreen partner, but offscreen, Russell has been married to his wife, Danielle, for seven years. As a parent, Russell says his job is to arm his sons with the tools they need to be independent. "Ultimately, apart from loving them and taking care of them, [a father's job] is to fill them full of the confidence that they need to deal with the world by themselves," he says. "It's whatever makes them happy. That's what it's got to be. You try and provide for them, be there for them, you give your time over to them. In fact, you be the person that they want you to be."

Parenting is also about leading by example, Russell says. "Just the other day, I was doing Lego with my son Charlie, and it was a Lego piece that was actually his little brother's, and I watched him get impatient with his little brother and start putting the thing together himself. So I kept going: 'Hey, Charlie, this is Tenny's thing. We're helping him, but we're not making it,'" he says. "And only a few minutes later when both of them were distracted I found myself putting the thing together and I went: 'Oh! He gets it from me.'"