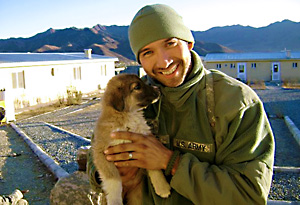 When three stray dogs wandered onto a U.S. military compound in Afghanistan, Sgt. Terry Young says he knew he had found three new companions—but he had no idea how important their friendship would become.

Sgt. Young first met Sasha, Target and Rufus in 2009 while he was stationed in Afghanistan. "First on the scene was Sasha. She was a sweetheart," Sgt. Young says. "Next was Target. We were playing football. She would come running out onto the field, wiggling her backside—it was the cutest little thing. And then Rufus, he had the big floppy ears and was just a big, lovable guy."

These dogs were more than just strays to Sgt. Young and the other soldiers in the 48th Infantry Brigade. "The dogs were just a huge pick-me-up," Sgt. Young says. "They were our babies." 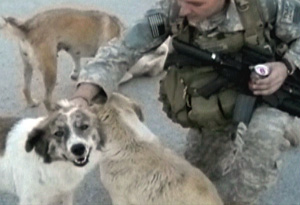 One February night in 2010, a suicide bomber sneaked onto Sgt. Young's compound and headed toward the barracks with more than 50 American soldiers inside. Before the bomber could get in, Sasha, Rufus and Target spotted the man and attacked.

"Sasha was barking, trying to cause a commotion. Target and Rufus latched onto him. He was able to get the door open, but that was far as he got," Sgt. Young says. "He detonated himself at that point—it was absolute chaos."

How the dogs knew to attack is a mystery, but Sgt. Young says he thinks animals have a sixth sense. "I really feel that they knew he was up to no good, so the three dogs decided to stop him in his tracks," he says.

After the smoke cleared and the chaos subsided, the soldiers searched the rubble for these heroic canines. They found Sasha first. "Her wounds were so bad that she had to be put down," Sgt. Young says. "Then we found Rufus and Target. They were in bad shape." 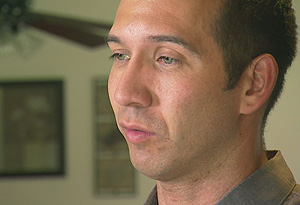 The troops helped nurse Rufus and Target back to health and celebrated their courage. "They earned the right to be treated like soldiers, so that's exactly how we treated them," Sgt. Young says.

When he talks about what the dogs did that night, Sgt. Young breaks down in tears. "If the dogs wouldn't have been there that night, to be honest with you, I really don't even want to think what would have transpired," he says. "[The bomber] would have killed a lot of my friends."

Sgt. Young survived the explosion, but there was another battle still ahead—getting Rufus and Target out of Afghanistan. Flying an animal to the States from a foreign country involves a lot of red tape, so Sgt. Young was forced to leave these heroes behind. "When we were leaving Afghanistan, I knew this would probably be the last time I would ever see Target or Rufus," he says. "I just thought they were two of the most absolutely amazing dogs that I had ever encountered." 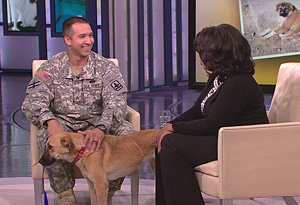 When animal rescue groups like the Puppy Rescue Mission heard about Rufus and Target, these organizations made sure the story didn't end there. They were able to raise enough money to help Sgt. Young adopt Target and fly her to his home in Arizona. Rufus was also flown in and adopted by Sgt. Chris Duke, another soldier in the 48th Infantry.

"It's really a dream come true. I never thought I would see her again," Sgt. Young says. "The dogs were definitely heroes that day, and I cannot stress enough how many lives they saved."