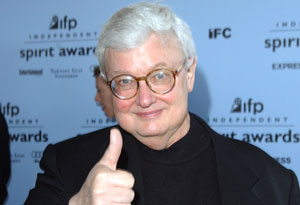 Before becoming television's most famous film critic—giving his thumbs up or thumbs down to more than 10,000 movies—Roger was a reporter. He joined the Chicago Sun-Times in 1966 and became the paper's film critic one year later. In 1975, his work earned him the Pulitzer Prize.

That same year, Roger debuted his television show with fellow critic Gene Siskel. Their signature thumbs up, thumbs down review system became such a hit, they trademarked the phrase, "Two thumbs up."

For the next 24 years, Siskel and Ebert were household names. But in 1998, Gene was diagnosed with a brain tumor and died less than a year later. Roger was devastated.

Another blow came in 2002, when Roger was diagnosed with thyroid cancer, which later spread to his salivary glands and jaw. He endured surgery after surgery, and the cancer eventually took Roger's voice. In 2006, he was forced to leave his show after more than 30 years on the air.

Although cancer has left Roger unable to speak, eat or drink, it hasn't slowed him down one bit. More than forty years after he started, his words are as powerful as ever. His reviews are still featured in more than 200 newspapers worldwide, and readers flock to his popular blog.