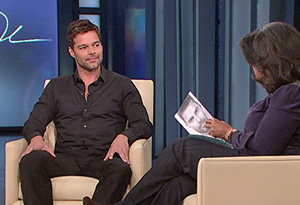 PAGE 3
Ricky says he knew from a young age that he was gay. "I was 4, 5 years old and I felt this chemistry," he says. "The first day I went to school, when I came back, the first thing they asked me was: 'Do you have girlfriends already? How many girlfriends do you have?' ... I was like: 'What? I don't understand what you mean.'"

Ricky says he never felt he could be himself. "For many years, I was told that the way I was feeling was a mistake. I was told that what I was feeling, that my emotions, were evil," he says. "I would try to deny those emotions as much as I could. There was a moment in my life that I thought I was a really bad person, that I was not enough."