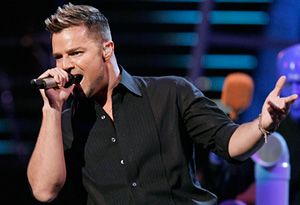 As Ricky got older, his sexy voice, red-hot dance moves and chiseled good looks turned him into an international solo sensation. He sold out stadiums, gave one of the most explosive performances in television history at the 1999 Grammys and found himself surrounded with beautiful women on and off the stage.

To the world, it appeared Ricky was truly living la vida loca. In reality, he says he was living a lie. For years, Ricky declined to respond to rumors of his sexuality—until March 29, 2010. That day, Ricky came out on his website, saying: "I am a fortunate homosexual man. I am very blessed to be who I am."

Now, Ricky is opening up about his decision to speak his truth in a new memoir, Me. In his first television interview since coming out, Ricky sits down with Oprah to reveal why he stayed silent about his sexuality for years and his decision to become a father.