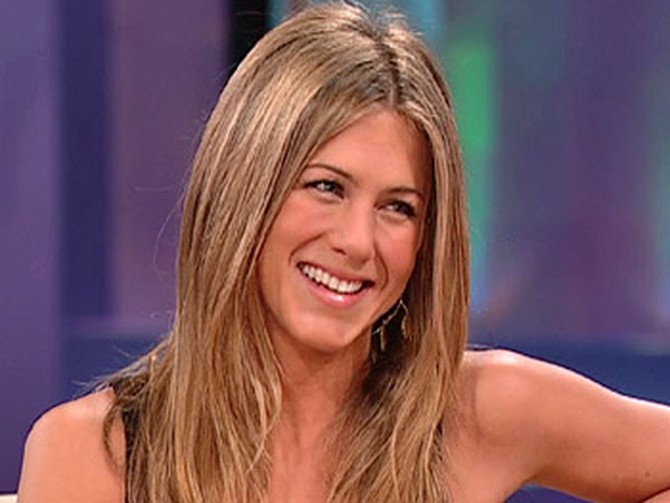 Before Jennifer Aniston tells us about her new passion, she's here to set the record straight on a few rumors, from brand new boobs to a breakup.

First, are she and Vince Vaughn broken up? "No," says Jennifer. "No."

Next, in an Oprah Show town hall, even Roy Peter Clark, who is a senior scholar from a media think tank, couldn't escape magazine covers in the airport questioning whether or not Jennifer has had breast implants. Has she?

"No boob job!" says Jennifer. "You know what it's called? It's called 10 pounds. Here's what it is—this is the funny thing—you're either, 'Oh, look at the bump,' or 'The Pregnant...,' and they circle the bump and there's an arrow. But instead it's like, you know, maybe a couple cheese plates too many..."

And finally, Jennifer has a new baby! "Yes, I do," says Jennifer. "Dolly. A little puppy. A little five-month old. A little white German Shepard." 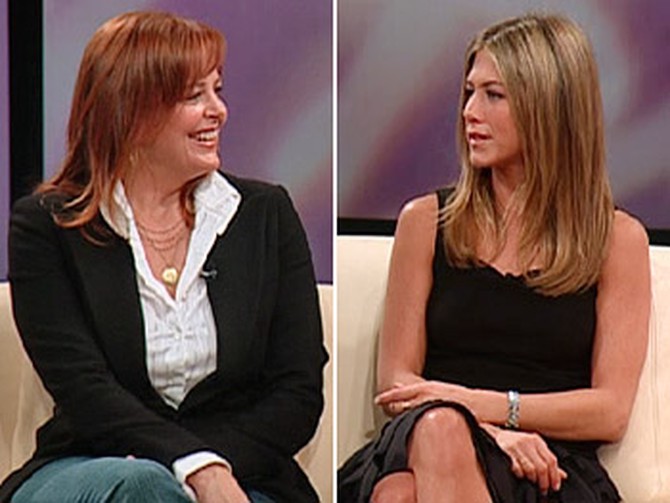 Jennifer recently joined forces with Glamour magazine to do something that she's never done before—direct. Glamour held a contest where thousands of women submitted their real life stories about defining moments that made them stronger, wiser and victorious. The winning stories were then made into short films directed by award-winning actresses and writers.

Jennifer is making her directorial debut with Room 10, a film she co-directed with one of her best friends, documentary producer and director Andrea Buchanan. "At first it was the idea, I think, that was scary," says Jennifer. "Once we hit the ground running, there was no fear at all."

Although they were given about 30 stories to choose from, Jennifer says she knew the first story she read was the one she would direct. "We were on a ski trip and they were all skiing and I was not skiing—I just couldn't, it just wrecked me," she says. "It was so beautiful...So universal...A story that everyone will relate to." 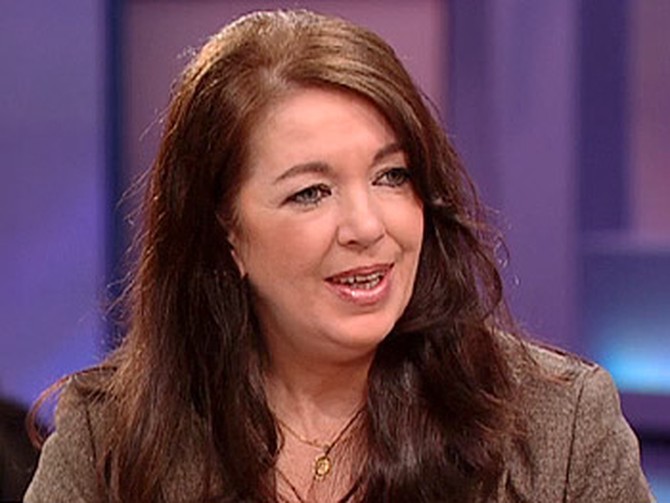 Room 10 is based on a short story written by Colleen Goldrick, a mother and nurse from New Jersey. Colleen wrote about a couple who changed her life forever.

Colleen's own "fairy tale" was not turning out the way she had imagined it—her marriage had ended and her dream job had left her feeling cynical. "One thing I found out about nursing is that a lot of elderly people die alone, they die without family," says Colleen. "To see it time after time starts hardening your heart a little bit."

She writes, "I never thought I would find beauty in death, but one day I did. I was working as an RN and taking care of an elderly man who was dying. He was unconscious. And when I came on duty, no one was with him. I came back into the room and sitting there next to him was a very elegant elderly lady dressed beautifully holding his hand and talking to him. She noticed me and introduced me to her husband of 60 years. She told me that today was going to be the day she lost her John." 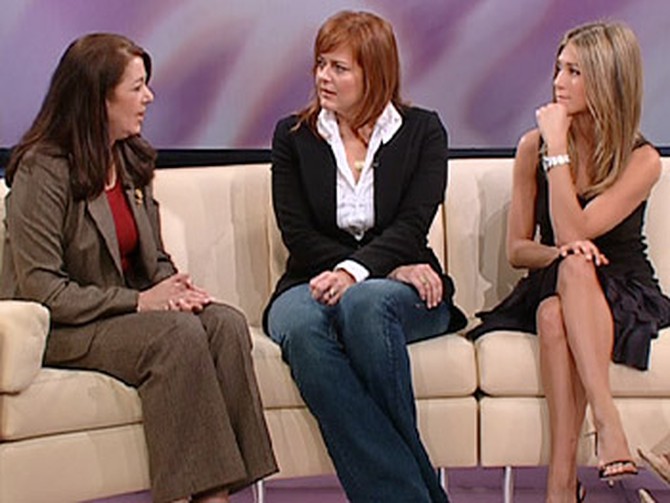 Colleen says when it was time for the woman's husband to pass away she called the couple's son. What happened next changed her life forever.

"The turning point for me was when the family came in, because the room was filled with like 20 people. The sons came, the grandchildren came, and even the little grandchildren," says Colleen. "That's when she just rubbed his arm and she said, 'The kids are here now. I'll be okay.' And he passed away right after that. That was really just...it was a beautiful moment."

Colleen realized, "I didn't need the happily ever after. It's the other people you touch in your life...I mean, what a legacy he left." 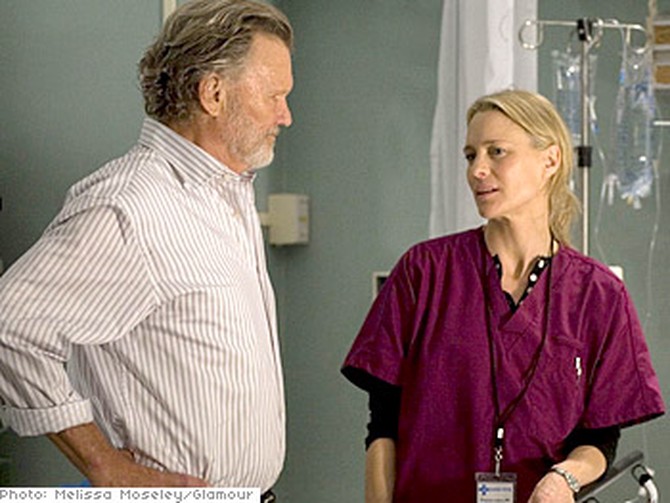 Room 10 stars Hollywood legend Kris Kristofferson and Robin Wright Penn. What was it like for them to work with the rookie director?

"I have so much respect for Jennifer as an actress, it's very easy for me to take direction from her," says Kris. "I think I'll get more work if there are more women directors!"

Robin Wright Penn, Sean Penn's wife, plays Colleen in this movie. "I was approached first with ... 'Hey, you want to do this short that Jennifer Aniston's directing?' And I said, 'Yeah, I do!' because I always loved her from afar," Robin says. "And then they told me that it was stories made by women for women and I just thought, what a great opportunity. This is the new millennium for women. Women are in film. They're here. There is a pulse. It's just we need to open the screen door."

Robin says she felt "girl power" on the set. "I loved working with Jennifer," Robin says. "She's very in tune and a very calm presence. There's such a genuine feeling on the set, just, you know, girls. There was a real sense of that community. And she being the leader, she was incredible."

Visit www.glamour.com to find screenings near you and how to submit your own "reel moment."

Actress Bryce Dallas Howard, daughter of Academy Award®-winning director Ron Howard, also made her directorial debut in the Glamour Reel Moments project. For her, the experience was a personal triumph.

"I've really wanted to be a filmmaker for a long time. And I've been so scared to even show anyone anything that I had written or even talk about it," Bryce says. "I think a lot of that has to do with my dad because I have so much respect for him and what he's created and I didn't want to step on anything or ruin anything. So to have an opportunity to be given a voice in that way...it's incredible."

Bryce says she showed her parents the film after it was edited. "I couldn't believe how nervous I was," Bryce says. "They're...very biased. They were like, 'It's really good.'" 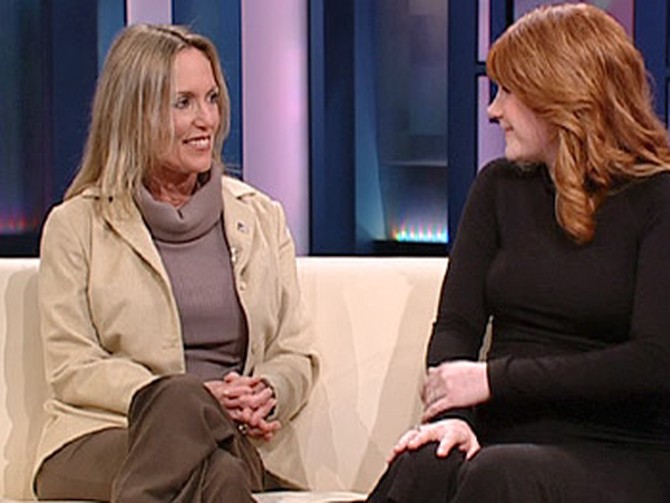 Elizabeth Schemmer was a divorced 40-year-old when she came across the personal ad that would change her life. The ad began: "Just divorced and ready to live again. Cantankerous, tall, profane, affectionate 60-year-old has rewritten will to leave everything to the last woman I have breakfast with. If you're 21 or over but under 75, svelte, cuddly, can read and make a decent ham and cheese sandwich, don't mind waiting in hospital emergency rooms and enjoy a spontaneous lifestyle, you could be the lucky lady."

Elizabeth replied and met Ben a month later. "When I saw him, my heart broke," Elizabeth says. "He was 6'2" and 130 pounds and near death. And there was no way I could love this man physically or emotionally. I just couldn't do it. The person on paper was solid. Strong. The person I saw belonged in a nursing home."

She asked to continue a writing relationship with Ben, but he was persistent. Eight months later, he had gained 50 pounds, and they fell madly in love. Despite their happiness, he was still very sick, but the couple married anyway and traveled the world. "He made me want to live again because he had character," Elizabeth says. "He had guts. He was funny. He was smart."

After 11 wonderful years of marriage, Ben died in Elizabeth's arms. 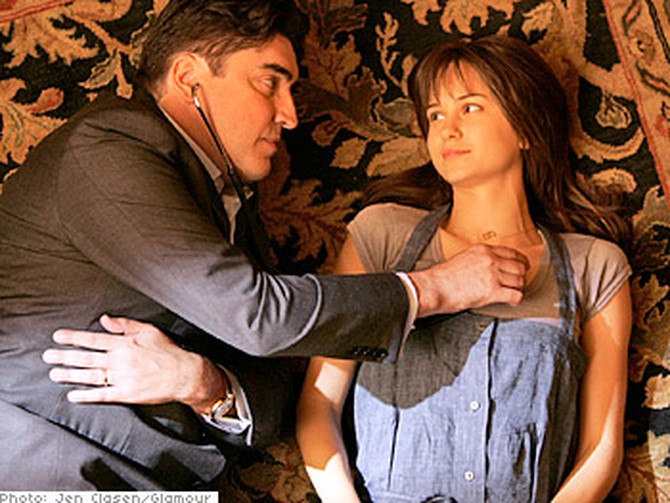 Alfred Molina and Katherine Waterston star in Orchids, the story of a woman who takes a risk, answers a personal ad and meets the man of her dreams. Bryce, who is expecting her first child, chose Elizabeth's story because it was "like a fairy tale come true."

"I thought that's so fantastic. I mean, here's a woman who's experiencing loneliness, and she's willing to come out of herself and take a risk and meet someone and everything works out," Bryce says.

Bryce says she took a risk herself in co-writing and directing the film by putting some of her own fears in the story line. "I was writing so, so much my whole life and just never showing it to anyone," Bryce says. "[The main character] is a photographer and then in one moment he asks her, are you any good? And she says, 'I don't know. I don't develop them.' And it was my way of just kind of purging that."

So what's it like for Elizabeth to see her life adapted to the big screen? "I'm very honored and Ben would be very honored," Elizabeth says. 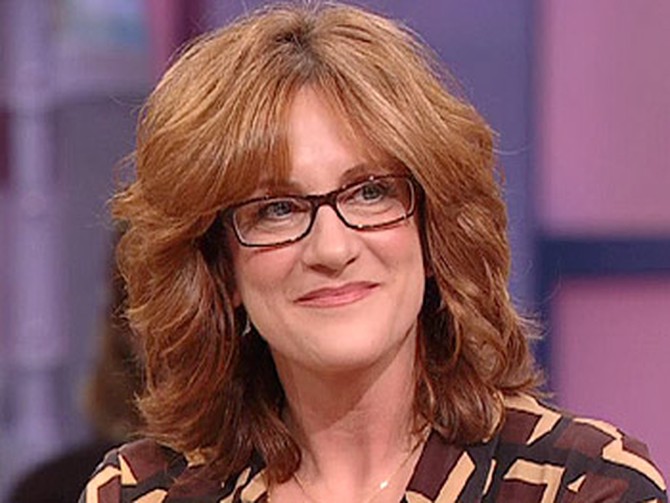 Carol Leifer, the comedienne and writer behind some of Jerry Seinfeld's biggest laughs, also got her first shot at the director's chair. She says she was "all over" this project.

"You know how they say squeaky wheel gets the grease? Call me Squeaky," Carol says. "This opportunity is so rare. To break into directing in Hollywood is almost impossible. And the catch 22 of it is if you want to direct, they'll say, 'What have you directed before?' So it's kind of a vicious cycle."

Blinders is the story about a woman looking for love in the big city. Carol says she loved the humor in the story. "What I loved about it was I have so many girlfriends who are single who complain about never meeting anybody, and they're smart and attractive and successful," Carol says. "And then you spend an afternoon with them and you see that people are flirting with them left and right and they're just not picking it up. They're just not open to it." 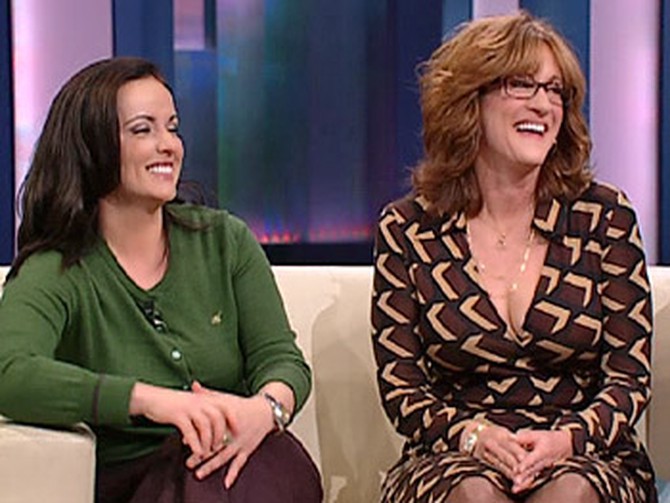 Alexa Raad is the real-life inspiration behind Carol's film and literally couldn't believe her story had been chosen!

"I must have been delirious with lack of sleep because I was on [the] Glamour magazine website, and I must have sent in one of my stories," Alexa says. "When they called me and said you're a semi-finalist, I didn't believe them. They had to actually send me my story, and I was, like, 'Yeah, that looks like my story.'"

Alexa says her friends often told her to concentrate less on work and more on being open to new people. "They'd say, why don't you get out and meet guys? Be more open. Flirt," Alexa wrote. "I decided that for once in my life I would be open to whatever came my way and maybe I would, God forbid, flirt back with a stranger."

Alexa did so—but didn't get the outcome she expected. She was once on a subway in Berlin with her dog and noticed a guy who was "drop dead gorgeous" in front of her who also had a dog. He looked right at her and she flirted back. However, as it turns out, the man was blind and hadn't seen her carry out her brave new plan! 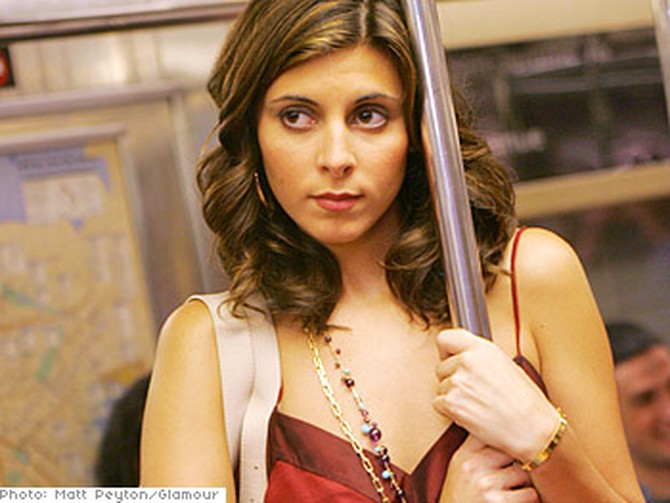 Sopranos actress Jamie Lynn Sigler stars in the film. "My experience on Blinders was inspirational, empowering," Jamie says. "It really opened my eyes to the fact of all the opportunities that are available for women in Hollywood and in the world.

Jamie says she can identify with the "Reel Moments" theme. She says her own real life moment came after her divorce. "What I've learned since then is you can want somebody but you don't need somebody because I'm becoming secure enough with me that I can make my own mistakes. I can fall, but I can pick myself back up," Jamie says.

Carol said her own defining moment took place the night before filming started on Blinders. "I saw these signs in New York on 42nd Street, like 'street closed tomorrow,' 'shooting going on,'" Carol says. "I was like, 'Oh, that's cool. They're doing a movie.' I was like, 'Oh, my God. They're shooting my movie tomorrow. That's my movie.'"