Race on The Oprah Show: A 25-Year Look Back 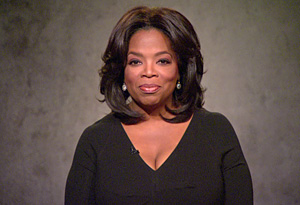 Dr. Martin Luther King Jr. represents strength, service, sacrifice and, above all, possibility. Oprah says that it's thanks to him and the civil rights movement that she has become the woman she is today. In honor of Dr. King's birthday, Oprah is taking a look back at race on The Oprah Winfrey Show over the past 25 years.

In 1987, when The Oprah Show had been on the air for just six months, Oprah taped a show in Forsyth County, Georgia—which had gained a reputation for being a hotbed of racism. At the time, not a single black person had lived there for 75 years.

Oprah spoke to an audience of local community members who insisted it was their right to choose to live in a white community. After several audience members stood up to say they didn’t want a mixed-race community or they were “afraid of black people,” one brave woman spoke out to say it was a time for change. “I just hate to think that someone is going to get hurt before the people get some sense about them and talk about this and get it like it’s supposed to be...black and white together in Forsyth County. There’s no other way,” she said.

A few months ago, Oprah Show producers went back to Forsyth. It is now one of the richest counties in the United States and more than 7,000 African American citizens live there. The residents there—both black and white—say it’s a great place to live and raise a family. 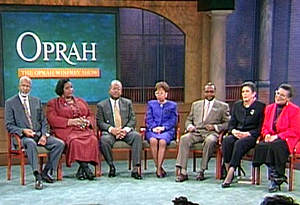 In 1957, the nation was riveted by the Little Rock Nine—nine black teenagers who were sent to integrate Little Rock Central High School in Arkansas. On their first day of school, they met opposition from threatening white students and even the National Guard, who blocked their entrance into the school.

Finally, they were allowed to enter the school—from a side door—and a white mob erupted. Once inside, they found their struggles for respect and equality had only just begun.

In 1996, Oprah spoke with those former students who said they went to school in an atmosphere of hostility and war. Three former white students spoke out that day to say they regretted their opposition to the Little Rock Nine. One of the former students, Ann, says she was raised in a racist family and has now broken that chain of racism with her own family.

“That was a blessed day for me to be in the studio with the Little Rock Nine because there’s no question that they paved the way for people like myself. And their shoulders, I’m standing on them,” says Oprah. 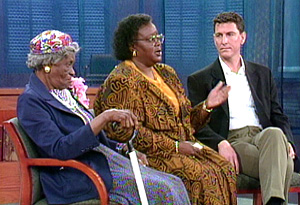 Edward Ball’s ancestors owned more than 4,000 slaves and a dozen plantations in South Carolina. On The Oprah Show in 1998, Edward came face-to-face with the relatives of slaves his family owned. On behalf of his family, Edward offered them this apology: “I want to say that I’m sorry for the suffering that my family caused your family so many years ago, and for such a long time. And saying that, we haven’t reached the end of the journey, we haven’t even come to the middle. But we might have just put our feet up on the path and taken the first small steps toward understanding. I ask your forgiveness.”

“That was a moment. I think we could all see the healing power of that apology, even 38 years later,” Oprah says. 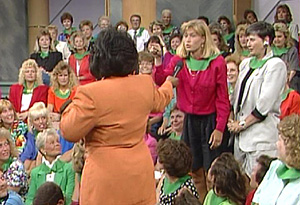 In 1992, The Oprah Show set up an "eye-opening" experiment. When the audience arrived that day, they were separated into two groups based on the color of their eyes—but they had no idea.

The blue-eyed audience members grew visibly upset at being discriminated against, and it wasn’t long before the brown-eyed people bought into the idea that they were superior. Eventually, the audience figured out that the show was not about the color of their eyes, but about race.

“I believe the lessons from that show are still so valuable today because it really illustrates how susceptible we all are to prejudice and how quickly people can be poisoned by misinformation and ignorance,” Oprah says. 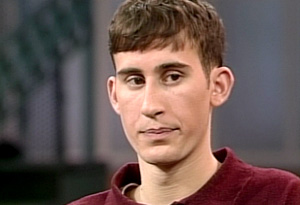 In 1995, Josh Solomon took some potentially life-threatening pills to change his skin from white to black. For one week, Josh lived as a young black man...and the results were chilling.

Josh was refused service in a restaurant, needlessly questioned by a police officer and seen as suspicious by people on the street. In the short time he spent as a black man, Josh concluded that we haven’t come as far as we thought. Afterward, Josh told Oprah that “white people get this respect and black people are constantly trying to prove that they deserve it or are worthy of it.”

“I thought that was so profound,” Oprah says. “It was really the first time we’d heard anything like that on our show. Particularly coming from a young white man.” 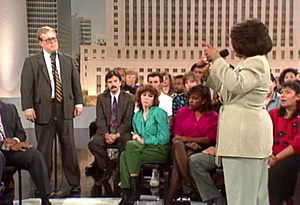 In the summer of 1992, long-simmering racial tensions in Los Angeles came to a head. That’s when the the brutal beating of Rodney King by white police officers was captured on tape. When the officers were acquitted, riots erupted across the city.

Even though many people warned against it, The Oprah Show arrived in Los Angeles just six days later. Oprah filmed a show with an audience of locals, who spoke openly and honestly about the riots and the racial tensions in the city.

“In 1963, Dr. King said, ‘Injustice anywhere is a threat to justice everywhere.’ And I think everyone who was a part of that show could identify with that,” Oprah says. 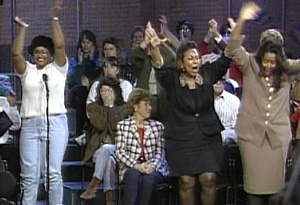 Just three years after the Rodney King beating, racial tensions emerged again on The Oprah Show. When Oprah and her audience watched the verdict of the O.J. Simpson trial together live, the audience’s reaction appeared to be divided by race.

See how Oprah and the audience reacted.

“I think many people were happy for O.J.’s acquittal because they thought justice was not served in the Rodney King trial and many trials before,” Oprah says. “I also think that Dr. King’s quote also applies here: ‘Injustice anywhere is a threat to justice everywhere.’” 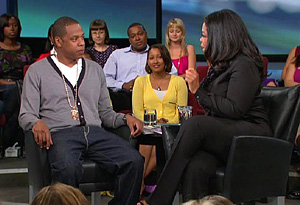 In 2009, rapper, artist and mogul Jay-Z went head-to-head with Oprah on a big controversy: the use of the N-word.

At the time, Oprah and Jay-Z agreed to disagree, but Oprah recently had an aha! moment while reading Jay-Z’s new book, Decoded. In the book, Jay-Z writes, “Rappers are young black men telling stories that the police, among others, don’t want to hear.”

“Reading this, I realized I was among ‘the others,’” Oprah says. “I appreciate this book so much that I made it one of my favorite things and I’m proud to say, I get it now.” 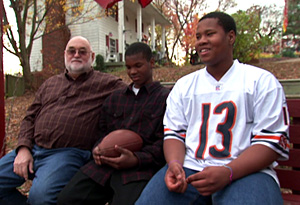 In 1989, former racist Jim Rainey appeared on The Oprah Show. He said he changed his ways when his biracial grandson was born, and he was ashamed of the way he felt before.

“He didn’t know I was a racist. He didn’t know how evil my mind was. He just knew I was Smoky...I was his granddaddy, and he loved me,” says Jim.

See how Jim changed his ways.

Today, Jim says he still feels ashamed of his dark past, but his transformation has come full circle—he and his wife have adopted two black children into their family. “It’s amazing that you can get this old and just now realize what your calling in life is,” Jim says. “That’s being a parent and a father to Robert and Walter. I hope that [my wife] and I both can last long enough to see them raised and have opportunities—opportunities that thugs like me would have denied them 40 years ago.”