A Conversation with Nadya Suleman 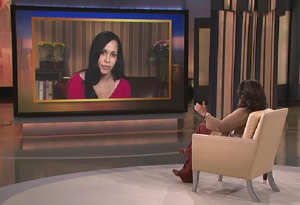 PAGE 14
Oprah: What do you think is the biggest misconception about who you are?

Nadya: Everything. Everything. Everything. From the moment I woke up, I have been placed into this unfamiliar life, foreign and foreboding, not familiar. This fictional character, Octomom, completely is the antithesis of who I am as a person and who I represent. And I know by strangers telling me who they think I am has allowed me to really see who I know I am and who I always believed myself to be.

Oprah: What do strangers tell you you are? What do they tell you?

Nadya: Octomom. Seeking fame. Having eight babies to be famous. I did not know even one would grow, let alone twins, let alone triplets. My goodness, who could imagine having a litter? I don't think cats have that many at the same time. I never ever could have conceptualized something like this happening based upon an immature, selfish choice that I made.

Who's gonna suffer? The children. Am I gonna exacerbate that and put them out in the media like they say I'm doing or am going to do? Absolutely not. I've been consistent in saying, no, I will never do a reality show. I was embarrassed to do the bikini shoot in January. That is not who I am. That is not my character. And I needed to make money to put food in my children's mouths. It is you, Oprah, I thank you for allowing me to finally speak the truth because thus far the media has been feeding people erroneous rumors and lies because sensationalism sells. The truth is boring.