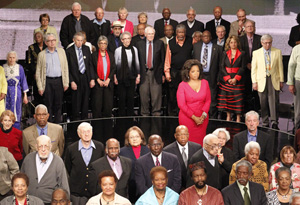 Photo: George Burns/Harpo Studios
PAGE 2
Fifty years ago, on May 4, 1961, the Freedom Rides began in Washington, D.C. That day, 13 men and women boarded two buses bound for the Deep South, a region plagued by racial injustice.

The plan was simple. The Freedom Riders would buy tickets on interstate buses for a two-week journey that would end in New Orleans. Along the way, the Riders would test federal laws that prohibited segregation by riding in the front of buses and sitting in waiting rooms designated "whites only" and "colored." It was dangerous and daring—some even considered it a suicide mission.

The movement was organized by the Congress of Racial Equality (CORE), which trained the Freedom Riders to be nonviolent and protest without ever striking back. They hoped these peaceful demonstrations would force the government to step up and protect their civil rights. Little did they know, the Freedom Riders, which totaled 436 by the end of the movement, would change the course of American history.

In honor of the 50th anniversary, Oprah has gathered 178 survivors of the Freedom Rides—including 95-year-old George Houser, the last surviving member of the 1947 Journey of Reconciliation—together to express her admiration. "As an African-American woman born in Mississippi and raised in the South, I, like so many of you, owe a deep debt of gratitude to the Freedom Riders," she says. "I stand among heroes."

Published 05/04/2011
Please note that Harpo Productions, Inc., OWN: Oprah Winfrey Network, Discovery Communications LLC and their affiliated companies and entities have no affiliation with and do not endorse those entities or websites referenced above, which are provided solely as a courtesy. Please conduct your own independent investigation (including an investigation as to whether any contributions are tax deductible) before donating to any charity, project or organization. This information is provided for your reference only.