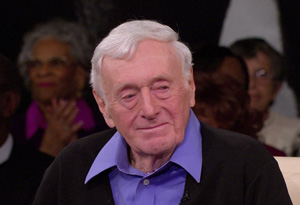 PAGE 11
The Freedom Riders from Nashville eventually made it to Montgomery, Alabama, where Klansmen had been waiting for them all night. When they arrived, a full-scale riot broke out.

John was there representing Attorney General Robert Kennedy, and he too fell victim to the violent mob. "I was hit in the head, and I'd never been knocked unconscious before," John says. "They knocked me down and kicked me under the car, and I woke up 30 minutes later. A policeman finally picked me up."

Days later, the National Guard escorted the Freedom Riders out of Alabama, but there was no feeling of relief as they crossed the border into Mississippi. Mississippi was the state they feared the most.

When the Freedom Riders walked into the whites-only waiting room in the Jackson, Mississippi, bus terminal, they were immediately arrested and eventually sent to Parchman State Prison Farm, the state's notoriously tough prison.

Ross Barnett, the governor of Mississippi, thought this would break the back of the Freedom Rider movement, but he was sorely mistaken. The Freedom Riders filled Parchman with fellow activists and transformed the prison into the next site of the civil rights movement.

Published 05/04/2011
Please note that Harpo Productions, Inc., OWN: Oprah Winfrey Network, Discovery Communications LLC and their affiliated companies and entities have no affiliation with and do not endorse those entities or websites referenced above, which are provided solely as a courtesy. Please conduct your own independent investigation (including an investigation as to whether any contributions are tax deductible) before donating to any charity, project or organization. This information is provided for your reference only.