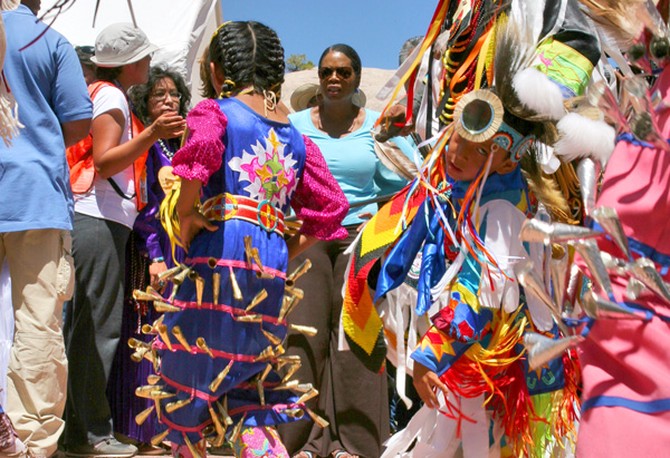 6 of 18
Oprah and Gayle were greeted by Joe Shirley, president of the Navajo nation, when they arrived at the powwow. A powwow, Joe told them, is a prayer service traditionally performed when soldiers return from war or when they are preparing for battle.

The ceremony begins with a prayer and blessing of the ground, an age-old Native American custom. "That really was, for me, the most meaningful part of the whole ceremony," Oprah says.

Dancers and drummers dressed in traditional Navajo headdresses and ponchos join in the ceremony. "Navajo people do not lead easy lives," Oprah says. "Witnessing them embrace their heritage, despite their hardships, touched our hearts."

"It shows you how the Indian community is steeped in tradition," Gayle says. "I was honored to be there."
Published 01/01/2006
PREVIOUS | NEXT
More The Oprah Winfrey Show
And They're Off
Flying Through the Plains
Road Trip All-Stars
Oprah and Gayle Go to Yosemite
Our Favorite Oprah and Gayle Moments of All Time
Southern Belles
The Home Stretch
Road-Trippers in Hobart, Tasmania