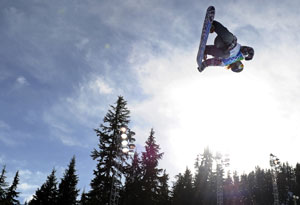 Photo: Adrian Dennis/AFP/Getty Images
PAGE 2
To win the gold, Shaun brought out his signature move—the Double McTwist 1260. Though he took a painfully public spill at the Winter X Games 14, Shaun says he knew he needed his big guns at the Olympic Games. "I've been working on this trick for about two years, and it's been my best friend and worst enemy. I've taken crashes after crashes and gotten back up," he says. "You've got to just get back on the horse. It's one of those things where if I backed out at that point and saved myself for the Olympics and never tried the trick till the games, I just feel like it would have mentally kind of messed me up."

The moment he landed the Double McTwist 1260 in Vancouver was an explosion of relief, Shaun says."It's one of those things where you've been thinking about this day and planning and dreaming and everything's building up inside. You're standing at the top, and you've got to land it."