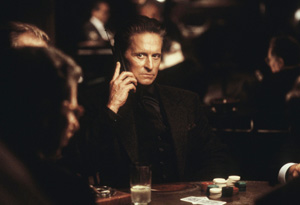 Michael takes on another Wall Street type, this time hedge fund manager Steven Taylor, in this thriller about Taylor's plot to kill his wife and inherit her fortune. Gwyneth Paltrow plays wife Emily, who is having an affair with David, a painter played by Viggo Mortensen. When Steven hires David, an ex-con, to murder his wife, he thinks he has hatched the perfect murder. But things don't go exactly according to plan.

Michael headlines an all-star cast in this critically acclaimed crime drama about drug trafficking between Mexico and the United States. Michael's co-stars include Don Cheadle, Benicio Del Toro, Dennis Quaid, Erika Christensen, Topher Grace and Salma Hayek. But perhaps his most significant co-star was then-girlfriend Catherine Zeta-Jones, whom he married shortly after the film was released. Michael portrays a conservative drug czar whose daughter becomes addicted to cocaine.

Three generations of Douglases star in this film about a dysfunctional New York family and their attempts to reconcile their problems. Michael's real-life parents, Kirk and Diana Douglas, play his parents onscreen, while his son Cameron Douglas plays his eldest son.