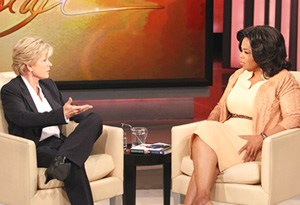 PAGE 8
Meredith says she didn't recognize she was gay until much later in life—years after her divorce with David. Though she says she had experimented with kissing her friends as an adolescent, and had crushes on other girls in school, Meredith says she never considered that she was actually gay. "I was a very conventional girl," she says. "I didn't have any other influences on me to direct me else-wise. I just didn't know. And I was the most shut down person you would ever be around. I was totally self-obsessed, no self-awareness."

After her mother died and her youngest children went off to college, Meredith says she rented a room in the garage behind her house to a young lesbian woman named Paula. "I just started to notice where she was all the time," Meredith says. "We started spending time together going on walks or movies and things."

Though her relationship with Paula eventually ended because of their 25-year age difference, Meredith says it changed her life forever. "I felt alive in a way that I had not experienced," she says. "Life was rife with possibilities."