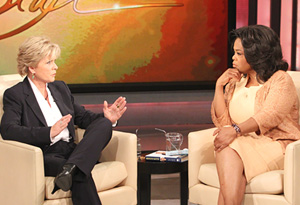 PAGE 3
David's pattern of abuse and control began before they were married, Meredith alleges. "He was talking about what we needed in our life, and that he had to make a certain amount of money for us to live on if we were to get married. And I said, 'I've kind of started working and I'm doing pretty well. Things have speeded up.' And he goes, 'Well, what you make won't matter. It's what I make [that] matters,'" she says. "It was one of the first signs that I had to stay small. I can't get in the way of what he needs to do. Somewhere I must have made that bargain and agreed to it. Not verbal. It was all just internal."

Watch Meredith share the worst moments of her marriage

Meredith says the negatives of her relationship with David mirrored the ones she had with her parents. "Not many other women would stay in a relationship like that. It's because [of] the belief system that I developed for myself as a child given the relationship I had with my mother and my parents. I came from a place where I had decided I was unloved and unlovable and not capable of love," she says. "I kind of was attracted to and found someone who thought of me the same way. ... There was a familiarity. It was like, 'Okay, I know how to be in this relationship.'"