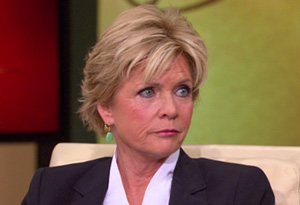 PAGE 2
Some still think of her as Meredith Baxter-Birney, but she actually dropped the name of her ex-husband David Birney 20 years ago.

While in her acting roles Meredith always came across as a strong woman, she writes in Untied about how different her life was off-camera. Meredith alleges that David was an abusive and controlling husband, and delves into her own struggles with alcoholism. "I felt [like] a fraud in my own life," she says. "But it wasn't in terms about any public persona. I didn't live in any public persona. I didn't think about my fans or anything like that. It was just such a little dark little place I lived."

Meredith claims David's abuse was more often mental and emotional than physical. "The truth is, you don't have to be abused physically too many times. A couple times and you know that's always on the back burner," she says. "It's the continuing corrosive effect of being belittled, denigrated in front of children, second-guessed, called down so that I have no voice. I had no voice for so long, which is probably, ultimately, why I felt I had to say something at some point."