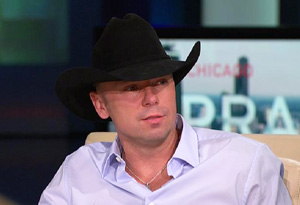 PAGE 3
In Kenny Chesney: Summer in 3D, Kenny reveals his preshow rituals. Before every concert, Kenny says he gathers with his band, friends and family in a place known as "the vibe room."

"The room is totally designed for us to get ready to go onstage," he says. "To me, that's where the show starts. It doesn't start at 9:15 when the music starts. It's a place for me to get mentally in the right spot and to remember why we came and to flush everything out in your mind that could be bothering you."

Some nights, Kenny says the connection with his fans is so strong, it's almost as if nothing else exists. "When I'm onstage and I'm in front of those people, it's a revival," he says. "It's as if I'm in an out-of-body experience."

As soon as he straps on his guitar and strums the first chord, Kenny says he tries to give his audience everything he's got. "I have to really be in the moment, because I feel like there's a kid out there in that audience somewhere [and it] might be his first concert ever, in his whole life," he says. "If I do my job, that kid may have music in his life forever."