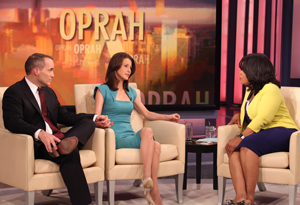 PAGE 10
Meanwhile, Andrew and Cheri say they felt trapped in California and wanted out. Still, they knew returning home wouldn't be easy. They had a partially finished home in North Carolina and few opportunities for income. Plus, they say John's team wasn't making it easy to go anywhere."We were controlled by millionaires and billionaires and three attorneys," Cheri says. "I was panicking. ... 'How are we going to pay for this [new] house? Where are we going to move? Our kids have to go to school.'"

In July 2008, Andrew discovered a tape at their house in a closet full of possessions Rielle had left behind. The tape featured John. "It's not an alleged sex tape," he says. "It shows him. It doesn't show Rielle."

Cheri says she can't give specific details, but can describe some of what's on the tape. "He is naked. He is performing sexual acts, and the woman is holding the camera. He is aware he's being taped."

Andrew says the video was shot before the election started. "He's having sex with a visibly pregnant woman while his wife is dying of cancer," Andrew says.

Though they've been offered money for the tape, the Youngs say they will not sell it. "So many people have said, 'Why have you just not turned over that sex tape?' That sex tape was my security," Cheri says. "Was I going to do anything with it? No. ... But I at least had something to prove what had happened."