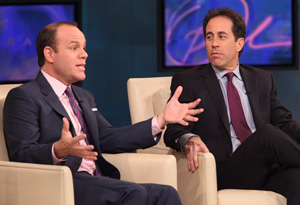 PAGE 10
Both Jerry and Tom sympathize with Rob. "I hate that moment [with the peanut butter jar] when you're going in deep. The spoon is not long enough, your fingers are getting in it...I understand that," Tom says. "If he was doing it like at half full and throwing it out..."

Jerry says Sonia shouldn't be such a good accountant. "You know: 'I called you three times and you called me back twice. That means you owe me.' Don't count everything. She's accounting," he says. "She can eat the peanut butter. She can go in deep and get that last little piece of nugget in the bottom."

Tom sees both sides but calls this one in Rob's favor. "It's just so aggravating for me just getting tips of my fingers all peanut buttered up or drinking that last part of the orange juice where for some reason it turns into some space-age syrup," he says. "So I'm saying if it really bothers you, miss, you can finish up all those extra morsels and the little bit on the toilet roll. But you win, sir."

Do you agree with the marriage ref's calls? Take the poll!