Superstar Jennifer Aniston is the rare actress who combines sex appeal with girl-next-door charm—and is also funny, friendly and vulnerable—all at the same time.

Just days before her 42nd birthday, Jennifer says she loves how it feels to be in her 40s. "I would say just a comfort and an ease within myself. And sort of an ability to really tune out the unnecessary negativity," she says. "And really understand that it's all about just putting love and goodness out in the world." 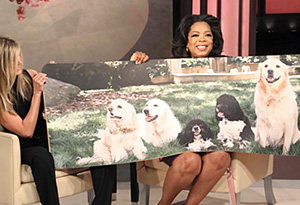 Photo: George Burns/Harpo Studios
To help Oprah celebrate her birthday on January 29, Jen comes bearing a gift—a customized yoga mat that is more than just a space to do a "downward dog" pose.

Made by YogaMatic, this mat was personalized with a portrait of Oprah's five dogs. "This is my family!" Oprah says. "What a nice present. Thank you." 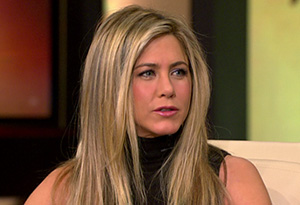 Recently Jennifer made headlines with a rumor that she had adopted a baby—but she's ready to set the record straight. "That's absolutely not true," she says. "I will be so excited whenever there is a child of any form in my life that I will scream it from a mountaintop."

Are you Jennifer's number one fan? Take this quiz. 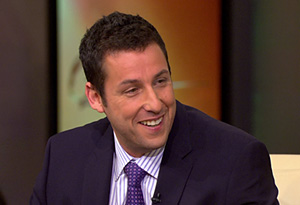 In the movie Just Go with It, Jennifer co-stars with comedian Adam Sandler. Though they've been friends for 20 years—Jennifer was even a guest at Adam's wedding—this is the first time they've worked together. Adam plays a single plastic surgeon romancing a much younger woman. Jennifer is a single mother and Adam's assistant, who reluctantly agrees to help cover up her boss's little lie by pretending to be the ex to help him win over his new love.

Because of their friendship, Jennifer and Adam say it was hard keep from laughing during filming. They even improvised some of the film's funniest lines. "When we were romantic, we were ad-libbing. Jennifer was very uncomfortable in scenes with her brother—I'm brotherly to her—so a brother being that close, she started ad-libbing," Adam jokes. "Like: 'Let me say something funny because your big nose is about to hit me.'"

How well do you know Adam? Take this quiz.

Adam says Jennifer gets some of the biggest laughs in the movie. "Every time I thought I was going to get the laugh, Aniston would snag it from me, saying, 'I'll take that, baby,'" he says. "And I was like, 'What happened? How is she better than me?'"

Jennifer wasn't the only one who remembered Oprah's birthday! Watch Adam give Oprah an unforgettable gift.

Photo: George Burns/Harpo Studios
The comedic talents on display in Just Go with It nearly led Jennifer in a different career path. After Adam landed a job on Saturday Night Live at 23 years old, he says he wanted Jennifer to become a cast member with other young comedians like Chris Farley, David Spade and Rob Schneider. "I remember being on the ninth floor where [Saturday Night Live [creator] Lorne Michaels' office was, and seeing Jen come in," Adam says. "I was like, 'Oh, my God. There's Aniston. Is she about to be on our show?'"

Jennifer told Adam she was turning down an offer to be on Saturday Night Live. "It was a boys' club," Jennifer says. "They thought I was making a huge mistake."

Instead, Jennifer took a part on Friends. "Did alright," Jennifer says.

Watch Adam and Jennifer reveal the advice they wish they'd known when they were younger.