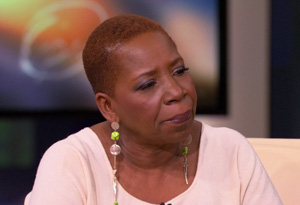 PAGE 13
Iyanla says she wasn't happy with the direction the show was taking, and eventually, she wrote a six-page memo that detailed the changes she wanted producers to make.

"I wrote this document saying this is my vision," Iyanla says. "In order for me to stay there—this is what has to happen. They said, 'Lord, the negress is awake. Lord, the negress is up.' ... They kept telling me we were going to teach spiritual law and principle, and then they'd give me another plate of almonds and another makeover and another dog to kiss."

Then, one day while Iyanla was taping a live show, she says she just stopped reading the words in the teleprompter. "It's like I had a psychotic break. And I said, 'I'm not doing this anymore,'" she says. "They said, 'Well, we can't have you here.' I said, 'Well, I don't want to be here.'"

The Iyanla Show was cancelled after one season.