Inside the Mind of President George W. Bush 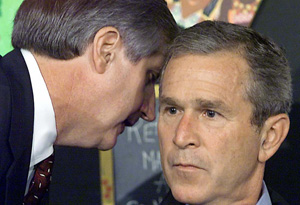 Photo: Getty Images
PAGE 4
One of the biggest decisions President Bush had to make in his career happened in the early morning hours of September 11, 2001. As he sat before a classroom of second-graders in Sarasota, Florida, no one knew America was under attack. Four planes had been hijacked by terrorists, and the world was about to change forever.

President Bush writes about that tragic day in his memoir. "I sensed a presence behind me. Chief of Staff Andy Card pressed his head next to mine and whispered in my ear. 'A second plane hit the second tower. America is under attack.'"

President Bush says he was initially angry. "[I thought], 'How dare they attack us,'" he says. "Then I looked at the little kids. The innocence of the children in the classroom in contrast to the evil of those who would attack America was vivid. It became very clear to me that my job was to protect the people."

With reporters and cameras lined along the back wall of the classroom, President Bush knew his reaction would be broadcast around the world. For seven minutes, he did not move from his chair.

"I'd had enough experience as a chief executive of a state to know during a crisis that the leader must project calm," he says. "My advice to somebody who is head of an organization during a crisis is to understand that. I decided to wait for an appropriate moment, and got up and calmly left."