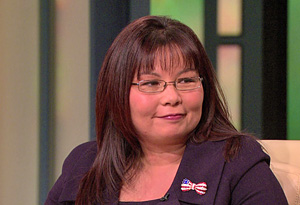 PAGE 7
Tammy's now focusing much of her efforts on fighting homelessness among veterans. "It's too many woman," she says. "So many things have failed to end up with them being homeless. It means that they've not been able to get a job. They have not been able to get affordable housing, and perhaps, there's medical care issues that are not being met. And [Veteran Affairs] is working as hard as we can to catch up."

Tammy says President Obama has committed a tremendous amount of resources to these efforts in the past 18 months. "He wants to end homelessness among veterans in five years, and we're going to make sure that happens," she says. "[Female veterans] have strength. They have leadership training. They've defended this country. They deserve better."

Alicia says her pride makes it difficult to ask for help. "I have such pride in my uniform and such pride for my military service, and everybody is so proud of our veterans," she says.

Tammy says this is the challenge the VA is facing. "The resources are there, but if [Alicia] doesn't know about it ... she cannot access it," Tammy says. "Then, to her, those resources don't exist."

Published 10/15/2010
Please note that Harpo Productions, Inc., OWN: Oprah Winfrey Network, Discovery Communications LLC and their affiliated companies and entities have no affiliation with and do not endorse those entities or websites referenced above, which are provided solely as a courtesy. Please conduct your own independent investigation (including an investigation as to whether any contributions are tax deductible) before donating to any charity, project or organization. This information is provided for your reference only.