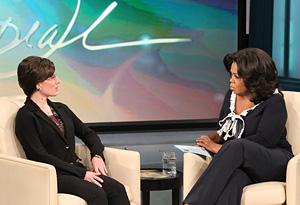 PAGE 3
Many people might be wondering what Sarah, Shane and Josh were doing hiking in northern Iraq in the first place. Sarah says it's actually a popular vacation spot for people from all over the world and is known as being a lot safer than the rest of Iraq. Plus, they were familiar with the Middle East—Sarah and Shane had lived in Syria for a year, where Sarah worked as a teacher.

The night before they were captured, the three friends were at a wedding in Damascus. The next morning, they set out for a tourist site called Ahmad Awah, a popular camp site for Kurdish families. After a night of camping out, Sarah, Shane and Josh stopped at a small food stand and asked for a recommendation on where to go hiking. They were directed to a trail, and about three hours later, they saw the soldiers.

"We had no idea that we were even near Iran," Sarah says. "There is absolutely no indication of a border. No signs. We didn't see a single person. No flag or building or a fence—the way you would imagine a border. We were just on a trail, and so I have no way of knowing where that border is."