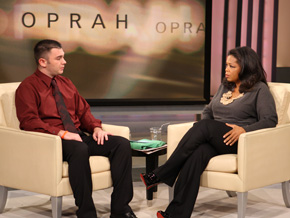 PAGE 6
When asked whether the jail time he served was enough, Reggie says he doesn't know. "I think about those 30 days in jail and what I went through and how hard that was for me—and I think about the two lives that are lost," he says. "I don't know if it was enough."

Still, Reggie says it's important for him to share his story with others. In fall 2008, Reggie spoke at a national summit in Washington, D.C., about the dangers of distracted driving. He also speaks at high schools to give students the warning he never received. "A lot of them think along the lines like I thought: 'I can do this. I'm safe,'" he says. "I explain to them: 'It's not safe. Absolutely not. Look what it's done to me. Look what it's done to these two families. You don't want to put anyone through that. It's not worth it.'"