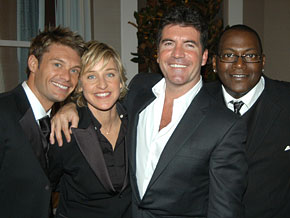 Photo: Getty Images
PAGE 7
In 2010, Ellen will be taking on another job, as the newest judge on American Idol. "It was a complete surprise," she says. "I had no idea that that was going to be offered to me. I was a little apprehensive because I thought, 'Well, are they going to think I'm taking Paula [Abdul]'s job away from her?'"

Since Ellen's always been a huge fan of the show, she says she brings a different and necessary perspective to the panel. "I'm going to bring a home viewer [aspect], which are the ones who vote anyway. We're the ones who call in; we're the ones who decide," she says. "It's got nothing to do with knowing anything about the music industry. It's just knowing what I connect to. I'm learning that I'm really picky. I think I'm going to really be much harder than I initially thought."

American Idol's toughest judge, Simon Cowell, may be known for his harsh comments, but Ellen says she's not scared to disagree with him. "That's new to me. [When] I grew up, I was always fearful of someone not liking me," she says. "One of the things I learned as I got older is that it's not about everybody approving of what I say. It's about if I believe in it and if I'm being truly honest. I don't want to be hurtful, but I want to be honest."